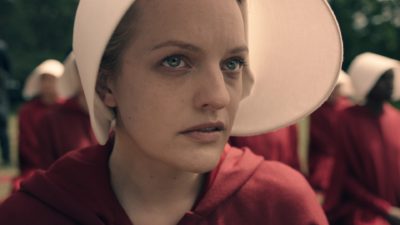 Offred lives in a world where the birthrate is plunging and few women are fertile. Now, such women are forced into sexual servitude in a attempt to repopulate the world.

Such is The Handmaid’s Tale – adapted for television from the novel by Margaret Atwood – premiering on April 26th. The first teaser follows the break.

I had another name, but it’s forbidden now. The Handmaid’s Tale premieres April 26th, only on Hulu.