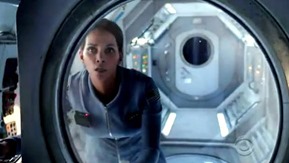 CBS has released trailers for their new summer and fall shows into the ether. Check them out after the jump.

An astronaut comes home from a year in space – a solo mission – pregnant. Her husband has developed an android son. A mysterious man tells her to trust no one. Her ‘son’ talks about extinction. Oscar®-winner Halle Berry stars in what could be the summer event of 2014, and it looks… intriguing…

Wife, mother, university professor, ex-CIA – not the usual resumé – but that’s what gets Elizabeth McCord into the position of Secretary of State for an old friend/mentor who is now the President of the United States because she not only doesn’t think inside the box, she doesn’t even know there is one. Welcome back to series TV, Téa Leoni! You might just be here for a while.

NCIS goes gumbo, cher! ‘This is New Orleans. It might be morning but the evening’s still young.’ I thought the embedded pilot showed a fresh take – and a fresh feel. Plus, Scott Bakula, CCH Pounder and Lucas Black!

A team of genius misfits deals with unique threats in our new digital world. Normal doesn’t even come near this neighborhood. Will it fly? Bigger question: will it land? I like what I see – but I like a lot of stuff that isn’t typically of the broadcast-success variety.

Who better to track a stalker than someone who shares similar behavioral traits? That’s the premise behind this smart psychological thriller about detectives in the Los Angeles Police Department’s Threat Management Unit. The trailer looks pretty cool and it stars Dylan McDermott and Maggie Q. So there’s that. Quite possibly the creepiest new series of the fall.

And now for something completely different… a half-hour comedy about a guy who’s the black sheep of his sports-crazed family not because he’s gay, but because he wants to move out of Boston so he can have a fair shot at a social life. If The McCarthys is as good as its trailer it might just make it. They’d better hope the trailer is representative and not just cherry picking…