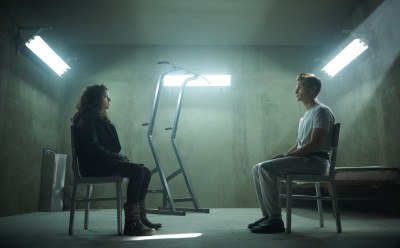 BBC America has announced an April 18, 2015 (9/8C) premiere for the third season of its critically acclaimed (yet appallingly snubbed by the Emmys) series Orphan Black.

BBC AMERICA’s Peabody Award-winning series Orphan Black is back and the first look at the new season is here!  The conspiracy thriller (10 x 60) stars award-winner, Tatiana Maslany, who returns to her unprecedented lead role as multiple clones. More vulnerable than ever before, Sarah, Cosima, Alison, and Helena’s bond will be put to the test with the reveal of highly trained, identical male-soldiers played by Ari Millen. Seen above, Sarah (Maslany) is about to embark on a tense face off with the lethal Rudy (Millen) in a Dyad prison cell.  The critically-acclaimed, action-packed series that sparked an inspired fan base named Clone Club, returns to BBC AMERICA, Saturday, April 18, 9:00pm ET.