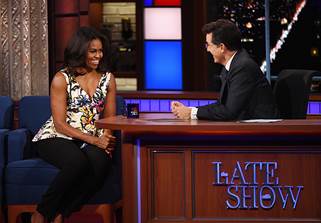 Mrs. Obama will be promoting the Let Girls Learn Initiative. Follow the jump for details.

First Lady Michelle Obama will make a return visit to THE LATE SHOW with STEPHEN COLBERT Tuesday, Sept. 20 (11:35 PM-12:37 AM, ET/PT) on the CBS Television Network. This will mark the first lady’s second appearance on THE LATE SHOW. Her first visit was on Monday, Sept. 28, 2015.

Mrs. Obama will promote “Let Girls Learn,” an initiative launched by the president and first lady in March 2015, which brings together the Department of State, USAID, the Peace Corps and the Millennium Challenge Corporation, as well as other agencies and programs, to help adolescent girls around the world go to school and stay in school.