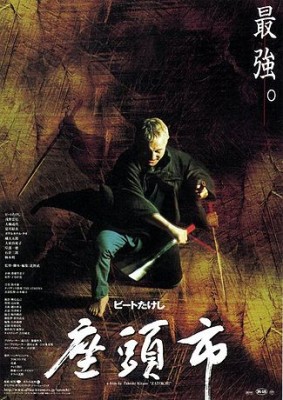 The 2015 Japan Film Festival has announced the films that will be screened during the weekend of the 2015 J-Pop Summit. The program will include feature length films and shorts and range from sci-fi and fantasy, to historical and even sports-based films.

One of the featured films is Blind Swordsman: Zatoichi (a personal favorite, pictured above), the lively re-imagining of the classic samurai movies that was directed by and stars Takeshi Kitano. For a complete list of films and special guests, follow the jump.

San Francisco, CA, June 30, 2015  – The 2015 Japan Film Festival of San Francisco (JFFSF), the first and only fully-dedicated Japanese film celebration for the S.F. Bay Area, has announced an exciting schedule of screenings and special guest appearances taking place during the weekend of the 2015 J-POP SUMMIT.

Opening in conjunction with the 2015 J-POP SUMMIT on Saturday, August 8th and running thru Sunday, August 16th, the 2015 Japan Film Festival of San Francisco will take place at the NEW PEOPLE Cinema, located inside the NEW PEOPLE entertainment complex in Japantown at 1746 Post St., San Francisco, CA 94115 (www.newpeoplecinema.com). Tickets to individual screenings are $13.00 each, unless otherwise noted. Film summaries, trailers, screening times and advance tickets are available at: www.JFFSF.org.

The 2015 Japan Film Festival of San Francisco proudly presents more than 25 celebrated films, many premiering in the U.S. for the first time, showcasing a wide range of Japanese cinema, including live-action, anime, short film, and documentary titles across a range of genres such as action, science fiction, historical drama, crime drama, coming-of-age, and romantic mystery.

Special guests for the 2015 Japan Film Festival of San Francisco will include acclaimed Japanese actor Tadanobu Asano, who is widely known for roles in movies such as Ichi the Killer, Zatoichi, Thor, 46 Ronin, and Battleship, as well as one of Japan’s top anime directors, Koji Morimoto, who is a founder of renowned Studio 4? and known for works such as Animatrix and Genius Party Beyond.

The evening will be highlighted by a personal appearance by actor Tadanobu Asano, who will introduce the film and participate in an audience Q&A, as well as a live DJ set collaboration by one of Japan’s legendary techno DJ and producer, Ken Ishii, along with Japan’s top anime director Koji Morimoto. Advance tickets to the 2015 J-POP SUMMIT/JFFSF Opening Night Event at the Castro Theatre are available now for $25.00 each from http://jpop2015.brownpapertickets.com.

Dragon Eye Morrison (played by Tadanobu Asano) is a reptile investigator who suffers from an intermittent explosive disorder caused by brain damage he sustained in a childhood accident. He manages to find a way to survive and control his urges to destroy with his love of reptiles and an electric guitar. Meanwhile, Thunderbolt Buddha (played by Masatoshi Nagase), an electric repairman turned vigilante who has acquired powerful electro-conductive powers after sustaining a childhood accident, goes after crime bosses and gangsters that take advantage of electric signals. Holding an obsessive hatred towards Morrison, Thunderbolt Buddha challenges him to a final showdown on the rooftops of Tokyo.

Divorce in the Samurai Age? – During the Edo period, women seeking divorce or fleeing abusive husbands ran to the Tokei-ji Temple in Kamakura. Nobujiro, a young doctor and author, and his aunt Genbei, mistress of the official inn of the temple, try to help the various suffering “kakekomi” women. Based on the novel by Hisashi Inoue, Kakekomi delivers extraordinary story of recovering women’s rights with a witty script.

Based on a true story, the film is set in the 1930s in Vancouver, where there was a baseball team called the Asahi formed by Canadian-born kids of Japanese immigrants growing up in a small Japantown. Struggling with racism and prejudice headed into the time of World War, the Asahi members join forces to make a difference through their passion for baseball.

When loneliness leads to forbidden love, how far will you go? After losing everything in a tsunami disaster, 10-year-old Hana is taken in by a young distant relative Jungo. The pair begins living together as family while sharing the profound sense of loss. Amidst the deep snows of Hokkaido, both desire to fill their empty, love-starved hearts and they set foot into a forbidden world. When an elder benefactor in their small town Mr. Oshio learns of Jungo and Hana’s illicit relationship, tragedy begins to take over. Don’t miss the special personal appearance by actor Tadanobu Asano who will introduce this film!

Space Brothers #0 functions as a great introduction to the TV anime series, Space Brothers (Sentai Filmworks), based on the popular manga by Chuya Koyama. The film harkens back to the origin of the Namba brothers’ dream of traveling to outer space, which was inspired by the world-renowned astronaut brothers Brian and Eddie Jay, another “Space Brothers” duo that dreamed of setting foot on the moon well before Namba brothers, Mutta & Hibito.

The World of Koji Morimoto

A collection of three short films by one of Japan’s top anime director Koji Morimoto, widely known as a founder of renowned Studio 4? and his works such as Animatrix and Genius Party Beyond. The famed director will appear in person to introduce the films as well as participate in an audience Q&A.

Magnetic Rose (45min): Magnetic Rose is the first of three episodes of MEMORIES, based on the manga by Katsuhiro Otomo (the creator of Akira). The film follows the members of the deep space salvage vessel Corona. While performing a salvage mission, the crew encounters an odd distress signal emanating from the Sargasso region, ominously nicknamed “The graveyard of space.” Soundtrack composed by Yoko Kanno.

Noiseman Sound Insect (15min): In the space of music, people used to live in the music fruit in the trees. One day, Dr. Frankein secretly succeeds in creating the creature ‘Noiseman’ by feeding the music fruit as fuel. Since then, the space was dominated by noise, not music. When a pair of kids Tobio and Reina find out this secret, they challenge Noiseman to bring the music back home again. The film’s soundtrack was written by Japanese composer, arranger, and musician Yoko Kanno.

Genius Party Beyond: Dimension Bomb (20min): Dimension Bomb is one of the five short animated omnibus “Genius Party Beyond,” produced by Studio 4?, which director Koji Morimoto founded in 1986. One day, a boy named Shin who wears a pupa-like mask encounters a girl named Koo. The days spent with Koo, who is a free spirit unlike any other, start to fill up his life with cherished and unforgettable moments. Noted musical composer and arranger, Yoko Kanno, provides the voiceover of Koo.

Blind Swordsman: Zatoichi is a 2003 samurai action film, directed by and starring actor Takeshi Kitano (“Beat” Takeshi) as Zatoichi. It also co-stars Tadanobu Asano, who plays Ronin Hattori, Zatoichi’s rival. The film is a revival of the classic Zatoichi series of film and television series. It won the prestigious Silver Lion for Best Director award at Venice Film Festival and went on to win numerous other awards internationally.

Based on the bestselling novel “Kami No Tsuki (Paper Moon)” by Mitsuyo Kakuta, and directed by Daihachi Yoshida, the critically acclaimed crime drama unfolds around an obedient housewife working part-time as a bank teller who becomes a reckless embezzler to live it up with a young lover. Leading actress Rie Miyazawa takes on an outrageous behavior in a subtle performance and gracefully displays her aging beauty.

The 2015 J-POP SUMMIT takes place Saturday and Sunday August 8th & 9th at the historic Fort Mason Center in San Francisco’s Marina district. Tickets and V.I.P Passes to the 2015 J-POP SUMMIT are available now at: www.J-POP.com. Throughout the weekend, attendees can enjoy a colorful assortment of Japanese pop-influenced culture, fashion, pop art, live music, technology and travel that will be complemented by celebrity Guests of Honor, anime programming, cosplay and pop idol contests, and a wide assortment of vendors and other programming.

Launched in 2013, Japan Film Festival of San Francisco is the first and only fully dedicated Japanese film event for the SF Bay Are. This year’s edition will feature a colorful mix of narratives, anime and documentary film premieres and exclusive screenings with special guest appearance at the NEW PEOPLE Cinema in SF’s Japantown from August 8th (Sat) through August 16th (Sun), 2015. More details and ticket information is available at www.jffsf.org.