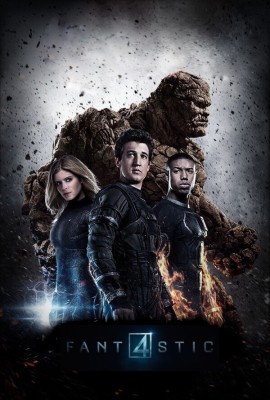 I don’t remember the origin of the Ultimates version of the Fantastic Four being so boring. Whatever their flaws, Tim Story’s two FF movies were not boring.

In one of the few collections of charming moments in Josh Trank’s Fantastic Four, a middle school Reed Richards tells his class he wants to be the first man to teleport himself – then, with a cobbled together gizmo in his parents’ garage, he teleports a toy car, causing a neighborhood blackout.

Cut to a high school science fair, where he teleports a kid’s model plane – and retrieves it(!) – before being disqualified for creating a magic trick (the administrator in charge has clearly never heard of Arthur C. Clarke). Fortunately, Dr. Franklin Storm (Reg. E. Cathey) and his daughter, Sue (Kate Mara) witness the event and sign him up immediately.

After his best friend, Ben Grimm (Jamie Bell) drops him off at the Baxter Building, Reed meets Sue’s brother, Johnny (Michael B. Jordan) – who had to be persuaded to join the Gamma Gate project after wrecking his souped up car in a street race. He also meets Victor Von Doom (Toby Kebbell) – who had walked out on the project earlier but was persuaded to come back to be a part of history.

We also meet Dr. Allen (Tim Blake Nelson) who has persuaded (have you noticed there’s a lot of persuading going on?) the government to back Storm’s project – and may have some sort of weaponization planned for the project if/when it’s successful.

With Reed on board, the project is successful and, after a chimpanzee is successfully sent to another dimension and brought back, Allen steps in and orders the project to be put on hold until others can be brought in to actually follow the chimp’s path – leaving the team that was actually responsible for the technology sitting on their hands. At least, that is, until Reed, Johnny and Victor get drunk and decide to just go ahead and do it themselves – after waiting for Be to arrive (Reed wouldn’t do it without him).

Of course it works and they find themselves in the new dimension (let’s call it the Negative Zone – even if they don’t) – but when an accident sets them at risk – and Victor falls to his doom (yeah, let’s go with that) – they are unable to manually return. Thanks to alarms from the lab, Sue is able to retrieve them, but they come back changed – and energy leakage from the Negative Zone also affects Sue.

Shot with a palette of blues and browns and dark greens, Fantastic Four has all the ingredients that make for an exciting superhero movie crushing before they can take flight. Events leading up to the manned trip to the Negative Zone are presented in a single, serious tone that snuffs out almost every bit of humor – a huge element in both versions of the FF in the comics).

It gets to the point that Drs. Storm and Allen might as well be variations on Austin Powers’ Basil Exposition – minus the wit and humor. Even the staging of the discovery of the group’s powers is as sterile/lifeless as it could possibly be. If Ben wasn’t a huge pile of orange rocks, there’d be nothing amazing about any of it.

The movie’s three credited scriptwriters (Jeremy Slater, Simon Kinberg and Josh Trank) seem to have looked at the comics and, powers aside, decided to strip the movie of everything that made them fun. In neither script nor direction is there any trace of the weird, off-kilter fun that made Trank’s Chronicle such a great movie.

Even Dr. Doom is a pale reflection of what he is in the comics – instead of a certain mad majesty, this Victor is mostly a pouty, immature twerp. As for what they’ve done with his look, Green Lantern’s CG costume was more convincing – when Doom seeks to destroy Earth so that we mere terrestrials don’t ruin the Negative Zone like we’ve done the Earth, he comes across as a child throwing a temper tantrum. It’s not a good look for him.

As for our heroic foursome, they are so diluted that by the time Ben utters his famous battle cry (‘It’s clobberin’ time’) it just doesn’t fit – and comes across more like some snobbish attempt at generosity to fans (‘let’s throw ‘em a bone…’) than an organic part of the movie.

I thought The Boy Next Door and The Gallows were awful, but at least they gave the impression of trying and failing. Fantastic Four feels like something that was never given a chance.

If this is best that 20th Century Fox can do with the property, they should just give the rights back to Marvel. Fantastic Four is just that bad.

One thought on “Fantastic Four: Come Back, Tim Story! (Almost) All Is Forgiven!”