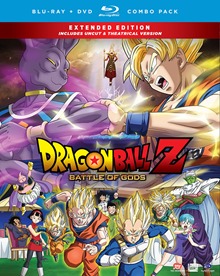 When the Dragon Ball Z: Battle of Gods Extended Edition on Blu-ray Combo Pack comes out on October 7th, it will contain both the theatrical release and an uncut version that is twenty minutes longer, plus over thirty minutes of extra features (Behind the Scenes: Battle of Voice Actors; The Voices of Dragon Ball Z: Unveiled; Textless Closing Song and the U.S. Trailer).

Follow the jump for more details and a link to pre-order.

Dragon Ball Z: Battle of Gods Heads to Home Video With an Uncut Version of the Film — 20 Minutes of Footage Not Seen in Theaters!

Fans of the series have a lot in store for them with this home video release.  The Dragon Ball Z: Battle of Gods Extended Edition on Blu-ray Combo Pack comes with two versions of the film: the Uncut Version – which includes an additional 20 minutes of never-before-seen footage – and the Theatrical Version. It also includes over 30 minutes of extra features, including an in-the-booth featurette with the fan favorite cast.

This must-own movie from creator Akira Toriyama will be available on Blu-ray Combo Pack, DVD, and Digital HD on October 7, 2014. Pre-orders are available starting today. Click here to pre-order your copy now! http://shop.funimation.com/Shop/ShopProductDetail.ss?itemid=95175 . Bring home the movie IGN calls “some of the most exhilarating fight sequences I’ve ever seen.”

Following the events from the “Dragon Ball Z” television series, after the defeat of Majin Buu, a new power awakens and threatens humanity. Beerus, an ancient and powerful God of Destruction, searches for Goku after hearing rumors of the Saiyan warrior who defeated Frieza. Realizing the threat Beerus poses to their home planet, the Z-fighters must find a way to stop him. Only Goku, humanity’s last hope, can ascend to the level of a legendary Super Saiyan God and stop Beerus from destroying Earth, and possibly the entire universe! Fans of Dragon Ball Z, one of the most successful anime brands of all time, will be delighted to know that Battle of Gods is an original work from the Dragon Ball creator himself, Akira Toriyama.

FUNimation® Entertainment is the leading anime company in North America. FUNimation has a proven formula for launching and advancing brands. They manage a full spectrum of rights for most of their brands including broadcasting, licensing, production, internet, and home video sales and distribution. For more information about FUNimation Entertainment and its brands, visit www.funimation.com