Entertainment News for The Rest of Us
Liana Bekakos
EMExclusives, Television 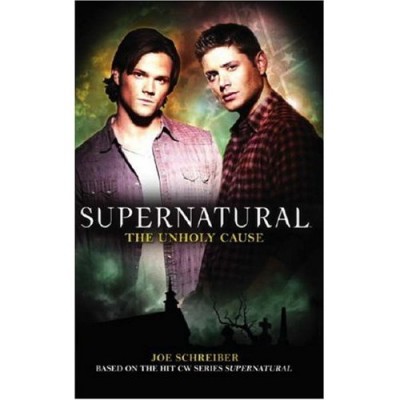 We were fortunate enough to be the recipients of a wonderful little gift and we can’t wait to share it with you!  That gift is excerpts from the new Supernatural tie-in novel The Unholy Cause by Joe Schreiber.  They serve as good examples of things that seem to be vital for fans who really enjoy these stories, such as the depiction of the brotherly relationship between Sam and Dean Winchester, which has been the heart and soul of the series since its first episode. This relationship has definitely hit some rough patches lately but the brothers are working hard at repairing it and restoring their trust in each other once again. Another thing, along with a strong backstory that the hunt is based on, is the danger and action that the Winchesters always seem to find themselves in as they carry out their lifelong mission of saving people, hunting things.  Or, as is the case of the current season, saving the world from the impending Apocalypse.

The story involves a powerful artifact that disappears in the middle of a Civil War re-enactment in Mission’s Ridge, Georgia. It is the job of the Winchesters to locate it and destroy it before the entire town is massacred and they along with it.

The official description is as follows: Twenty-seven years ago, Sam and Dean Winchester lost their mother to a mysterious and demonic supernatural force. In the years after, their father, John, taught them about the paranormal evil that lives in the dark corners and on the back roads of America…and he taught them how to kill it.  Way back in April 1862, Confederate Captain Jubal Beauchamp leads a charge across a Georgia battleground… Fast forward to 2009 and a civil war re-enactment becomes all too real. When Sam and Dean head down south to investigate they find that history has got somewhat out of hand…

Excerpts are after the jump. Enjoy!

“This business with the noose,” McClaine said, “that’s just part of it.  By the last year of the war, Lee’s armies were desperate.   Soldiers were using all kinds of Louisiana voodoo on the battlefield.   Hell, in the end, the CSA practically sanctioned it.  Benign stuff at first… charms for protection and herbal remedies.  Brought over by the slave trade, absorbed across the color line into local culture, including the poor white farm boys who were out there dying on the front lines.

“And by that point, the Confederates were using everything they could to hold off the Union.”  He shook his head.  “Except it was backfiring all over the place.  Here in Mission’s Ridge, for example, in the battle they’re re-enacting this week, the South was winning.  And then all of a sudden, without any explanation, Confederate troops started turning on each other, and on themselves.  The history books treat it like it was some kind of insurrection, a fatal breakdown in the chain of command.  But it was more than that.  It was a damn massacre and the town fell to the North because of it.”

“Let me guess,” Dean said.  “Jubal Beauchamp was right smack in the middle.”

“And he was wearing the noose,” McClane said.  “No doubt in my mind.”

Tommy McClane looked up at them wearily.

“Wherever it is,” he said, “good riddance.  There’s a reason why I’ve got protection charms over every door and window in my house.”

“Have you ever heard of something called Moa’ah?” Dean asked.

Tommy flinched visibly at the mention of it.

“Where did you hear about that?”

“Let’s just say I got to see some of it up close and personal,” Dean said.

“That’s impossible.  If you came across the Moa’ah, you wouldn’t be sitting around talking about it.”

“It’s inside the noose.”  Every trace of good humor had fallen away from McClane’s face.  “And those knots were tied in Hell.”

Their motel room was painted blue and gray.

Half of it was decorated with old photos of Union soldiers and painting of the Yankees.  The other half was decorated with Rebel flags and replicas of Confederated artifacts.  An imaginary Mason-Dixon Line divided the space cleanly between two sagging single beds.

Dean didn’t answer, just climbed on one of the beds and lay on his back with his hands locked behind his head, staring straight up at the ceiling fan as it paddled the humid night air.

After a moment of silence, Sam set up the laptop on the desk and went online, running an image search on different types of nooses.  In the quiet, he could feel the slow tension boiling off his brother until finally it became something he could no longer ignore.

Sam turned around and looked at him.

“Dean? Is there something you need to say to me?”

“So you’re just going to lie there and watch the fan spin all night?”

“I was thinking about brushing my teeth.”

“Come on.  If you internalize one more dark thought, you’re going to explode.”

Dean sat up fast, the shadows under his eyes making him simultaneously exhausted and bursting with nervous energy.

“Your buddy McClane talks about Hell like he did time there.  Meanwhile I could give him a freakin’ guided tour of the place.”

“He knows about the noose,” Sam said.

“And that’s another thing.  What *does* he really know?  History’s not my strong point, and personally I could give two craps about who lost the war and why.  I’m here to smoke this thing, whatever it is, and get out of Dodge.”

“It’s not that simple.”  Sam stood up from the desk.  “What’s this really about?  McClane or me?”

Dean stopped pacing and faced him across the room.

“It used to be about us, Sammy.  You and me and Bobby, and that’s it.  Now it’s you and me and whoever you feel like trusting on any given day.  And frankly I’m not so crazy about that.”

“Well, it’s a little late to cut him out, “ Sam said.  “So for the sake of getting this figured out, let’s focus.”

Sitting back down at the computer, he added, “Take a look at this.”

He clicked back to the digitized image of Jubal Beauchamp that showed the hangman’s knot around his neck.  Dean stepped up beside him and stood, arms crossed, peering down.

“Beauchamp’s rope had six coils around it, the standard technique. Right?”

“It says here that the more loops you make, the more the friction increases on the rope.”

“But if you look at this picture–” Sam magnified the Beauchamp image, squinting at the grainy pixels.  Centering on the noose, he looked closer, “there’s a seventh coil.”

“Riveting.  Really.”  Dean returned to the bed.  “So where does that get us?”

“We need to go out there in the morning and talk to Oiler again.  Find out *exactly* what he saw — what happened at the wedding.  He has to be holding something back.”

“And this time he’ll definitely tell us the truth.”

“No,” Sam said, “he’ll prevaricate and lie and try to cover up, just like everyone else is doing.  But we’re going to lean on him — just you and me — until he levels with us.”  He turned and faced the bed.  “Because I, for one, am sick of feeling like we’re not getting the whole story here.”

Dean studied his brother’s face, saw cold steel in his eyes and wanted to believe in it.

Sam closed his eyes and listened to the silence.

Far off in the distance he heard the scream of a train whistle.

Another explosion rocked the earth underneath them as they jumped out of the Impala and chased their shadows across the parking lot.  Sirens were rising up all around them in the distance.  The smoke was already thick enough to sting their eyes and make their noses water.

In front of them, the entire Mission’s Ridge battleground seemed to be on fire.  Men in Confederate and Union uniforms—hundreds of them—were scurrying in all directions, heading away from burning tents and enormous smoking craters that had opened up in the well-manicured grass like giant angry mouths.

The police cruisers in the parking lot were dispensing local cops and state troopers, the officers yelling into radios and trying to be heard above the chaos.

“The shooting,” Dean shouted, “where’s it coming from?”

Sam pointed across the creek and up the hillside, perhaps a thousand yards in the distance.  At the top of the hill, a row of SUVs and pickup trucks were parked overlooking the gorge below.  Standing alongside them was a phalanx of siege howitzers like the ones that they had seen earlier.  Two figures in uniform—at least from here they seemed to be in uniform—were packing ordnance into the rifled cannons.

“Look out!”  He winced as one of the howitzers blasted, its projectile shrieking downward over the hillside and across the creek, where it slammed into the earth with a deafening BOOM!  Great chunks of rock, dirt, and splintered tree roots sprayed up into the air and came showering down everywhere.

“I thought they were *replicas*!” Dean shouted.

THOOM!  Another shell slammed close enough that Sam actually felt the ground lurch up and go sideways under his feet.  Before he knew it he was on his knees, his mouth and nose clogged with soil and flecks of stone.

When his vision cleared, Dean was hauling him to his feet, brushing him off, yanking him back.

“I’m all right,” he managed, wiping a stream of blood from his eyes.  He was weak, dazed—the pores of his skin felt like they’d been packed with flying debris—his first instinct was to find safety, but running away wasn’t an option right now, and he knew it.

“We’re gonna get killed out here!” Dean shouted.  “They’re shooting at us!”

“What are you talking about?”

Sam spun around, regaining his bearings, trying to take in the full scope of what was happening around him—to make it make sense somehow.  Groups of re-enactors were streaming in every direction, trying to find their way back to the parking lot through the clouds of flying dirt and dust.

Up ahead, the corral of cavalry division horses were going wild with panic, bucking and trying to get free from their pen.

There were some binoculars lying in the grass next to a tent, and he scooped them up.  Brining them to his eyes, he squinted until the details came into view.

And he saw them.

The men loading the howitzers were indeed dressed in uniform, some Confederate, others Union.  As Sam stared at them, they seemed to sense that they were being watched, and one of them turned and looked right back at him.

His eyes flicked to total black.

The cannons roared again, three at a time now, filling the air with an explosion so loud that it seemed to blot out every other sound on earth.

“Damn it, Sam, we have to go NOW!” Dean screamed at him, but this time Sam hardly heard him.  “They’re gonna blow us up!”

“See for yourself.”  He thrust the binoculars at Dean and waited while he stared through them.

Then Dean seemed to become very calm.  He reached backward under his shirt, drawing a blade from its sheath.

“You want the blade?”

Sam shook his head.  He honestly couldn’t tell how serious his brother’s queries were.  And at the moment he didn’t care.  He was simply—almost absurdly—relieved to have Dean fighting alongside him.

The novel can be ordered directly from the publisher Titan Books or ordered through Amazon.