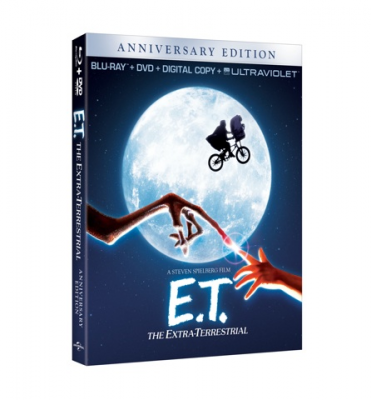 A few months ago I told you one of the most beloved movies of all time, E.T. The Extra-Terrestrial, is coming finally coming to Blu-ray. Today, we got a lot more detail on this release. It’s going to feature a shiny new restoration where Spielberg is putting the Guns back in! A truckload of extras and it’s all coming to you October 9th! The fall is shaping up to be a very expensive few months of Blu-rays – Jaws, Marvel Movie Collection, Bond 50th Anniversary Collection, Indiana Jones and now E.T. Blu-ray lovers have a great few months to look forward to. As much as I love streaming services like Netflix and OnDemand, there is no substitute for Blu-ray. Check out the full press release after the break.

E.T. The Extra-Terrestrial, AcademyAward®-winning director Steven Spielberg’s magical adventure, celebrates its 30th Anniversary with its first-ever release on Blu-ray™ October 9, 2012. Featuring an all-new, digitally remastered picture that delivers six times the resolution of DVD, as well as all-new 7.1 surround sound, the E.T. The Extra-Terrestrial Anniversary Edition Blu-ray™ Combo Pack includes the 1982 theatrical movie, an all-new interview with director Steven Spielberg, and “The E.T. Journals” featuring never-before-seen footage from the set of the film. The Blu-ray™ Combo Pack also includes UltraViolet™, a DVD and a Digital Copy of the film, offering fans a chance to relive the mystery, laughter and wonder of the iconic movie anytime, anywhere on the platform of their choice.

“When E.T. The Extra-Terrestrial premiered in 1982, it captured the imaginations of people young, old and everyone in between in a way that was unparalleled in modernmovie history,” said Craig Kornblau, President of Universal Studios Home Entertainment. “A global cultural phenomenon—and the biggest box-office blockbuster of its day—E.T. brought out the child in all of us. We are thrilled audiences will now be able to experience the film in the astounding quality of Blu-rayTM.”

BONUS FEATURES ON THE

The E.T. Journals: In this all-new bonus feature, retrace the day-to-day experience of creating E.T from never-before-seen, behind-the-scenes footage shot by Academy Award®-winning cinematographer John Toll. This piece will give viewers a unique feeling of being on the set and living the excitement of what it was like to make E.T.
Steven Spielberg & E.T.: Watch an all-new interview with Steven Spielberg, as he reflects back on the film and discusses his experience working with the actors, as well as his overall and current perspective on E.T.

· Deleted Scenes: Two scenes from 2002 version of the film.

· A Look Back: A special insider’s look into the making of E.T. featuring interviews with Steven Spielberg, the cast, and others intimately involved with the film.

· The E.T. Reunion: The cast and filmmaker reunite to discuss their thoughts on the impact of the film.

· The Evolution and Creation of E.T.: From idea to screenplay, throughcasting and making the film.

· The Music of E.T.: A Discussion with John Williams: Interviews and footage focused on the long-standing relationship between John Williams and Steven Spielberg.

· The 20th Anniversary Premiere: Composer John Williams played the score of E.T. live at the Shrine Auditorium for the re-release premiere of E.T. This featurette gives us a behind the scenes look at this presentation.

· UltraViolet™: The revolutionary new way for consumers to collect movies and TV shows, store them in the cloud, and instantly stream and download to computers, tablets and smartphones. Consumers can now truly enjoy their movies anytime, anywhere on the platform of their choice. Currently available in the United States only.

Advanced Remote Control: A sleek, elegant new way to operate your Blu-ray™ player. Users can navigate through menus, playback and BD-Live™ functions with ease.
Video Timeline: Users can easily bring up the video timeline, allowing them to instantly access any point in the film.
Mobile-To-Go: Users can unlock a selection of bonus content with their Blu-ray™ discs to save to their device or to stream from anywhere there is a Wi-Fi network, enabling them to enjoy content on the go, anytime, anywhere.
Browse Titles: Users will have access to a complete list of pocket BLU™-enabled titles available and coming to Blu-ray™. They can view free previews and see what additional content is available to unlock on their device.
Keyboard: Entering data is fast and easy with your device’s intuitive keyboard.
BD-LIVE™: Access the BD-Live™ Center through your Internet-connected player to access the latest trailers, exclusive content and more!

BONUS FEATURES ON THE DVD:

Universal is also partnering with leading independent games publisher Chillingo to publish E.T.: The Green Planet for the iTunes App Store. Inspired by a novel based on a story by Steven Spielberg, players travel with E.T. to his home planet, explore and build extraordinary intergalactic botanical gardens, and share their experiences with friends.