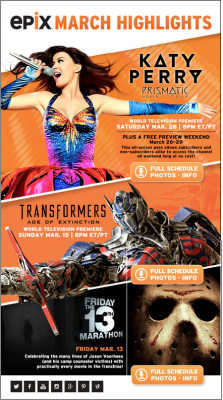 From the girl power of Katy Perry in concert to the thud and blunder of Michael Bay’s Transformers to a Friday the 13th marathon of every Friday the 13th movie, EPIX has something for everyone in March. Follow the jump for details.

The schedule is as follows:

TRANSFORMERS: AGE OF EXTINCTION is a feature film, directed by Michael Bay and starring Mark Whalberg, Stanley Tucci, Kelsey Grammar and Nicola Peltz begins where an epic battle has left a city torn, but the world saved.  As humanity picks up the pieces, a shadowy group reveals itself in an attempt  to control the direction of history…while an ancient, powerful new menace sets Earth in its crosshairs.  With help from a new cast of humans (led by Whalberg), Optimus Prime and his remaining gang turn to a mechanic and his daughter for help. Sunday, March 15, at 8pm ET/PT
KATY PERRY: THE PRISMATIC WORLD TOUR is an EPIX Original Concert Special directed by Russell Thomas, and produced by Done + Dusted with Katy Perry and Direct Management Group. For EPIX, Ross Bernard is the Executive Producer, Valerie Bishop is the Associate Producer and Lauren Zucker is the Consulting Producer.  Katy Perry is the latest artist to join the stellar roster of concert specials on EPIX. Past performances include: P!NK: The Truth About Love Tour, Madonna: The MDNA Tour, Coldplay Live 2012, Usher: Live From London, Britney Spears: Femme Fatale, Seth McFarlane: Music is Better Than Words and Madonna Sticky & Sweet Tour: Live From Buenos Aires. Saturday, March 28, 2015 at 8PM as Part of the EPIX Free Preview Weekend