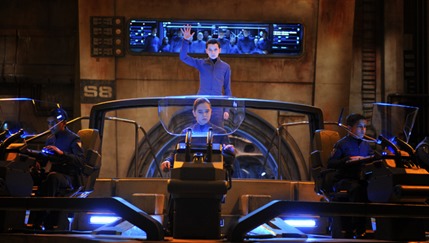 Ender’s Game looks great, has some very good performances and absolutely spectacular CG visuals. As a blockbuster, it has heart, emotion and action. What it doesn’t have is any anything more than a cursory examination of the themes that made the novel so powerful.

Alexander Ender Wiggin (Asa Butterfield) is a third child in a world where families are permitted two – and they are all potential members of the military. His older sister, Valentine (Abigail Breslin) was too compassionate; their older brother Peter (Jimmy Pinchak) was too easily provoked to violence. Their parents had to get special permission to have a third child and Ender seems to be the just right one.

The reason children are being recruited and trained for war is because Earth had been invaded by an insectoid species called the Formics and only a last minute burst of inspiration by the legendary Mazer Rackham (Ben Kingsley) had enabled Earth forces to triumph.

In the interim, it was decided that children were more able to learn and process information rapidly enough and without forming the potentially limited responses of adults. Ender, it seems, is potentially the leader that might make it possible for Earth to win over the Formics once and for all. 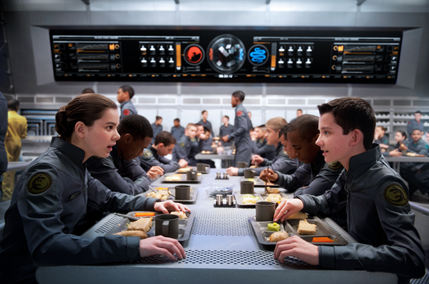 To that end, Ender is attending a military school where he finds himself facing down a bully in a manner that gets him promoted to Battle School by the gruff Col. Graf (Harrison Ford) – a combat training facility on a distant asteroid, where he is one of many learning to fight in zero gravity (in an icily beautiful Battle Room) and through video games. There he meets and befriends a group of trainees – Bean (Aramis Knight) and Petra Arkanian (Hailee Steinfeld) among them – while navigating the same kind of dynamics as before, only at a higher level (think bullies with more training).

Finally, he is promoted to Command School where he and that group of friends/colleagues find themselves drilling over and over on what amounts to the galaxy’s biggest, most detailed video game – culminating in a final test that is more elaborate than all of the previous tests combined. This is also where he meets Rackham, who is definitely not he was expecting.

Ender’s Game works as an adventure, more or less, but it doesn’t really deal with the many themes fans of the book are expecting. Sure you’ve got the drone warfare (depicted in the book almost thirty years ago); the idea of child soldiers, and the use of video/virtual reality games for military training. There are even nods to the ethics/morality/necessity of war – but they are not really explored and mostly get lost in the momentum of the adventure. It is pretty cool, though, to think that the novel had the equivalent of iPads long before they were invented.

In the film, Col. Graf is saved from coming across as a monster because you can see in Ford’s eyes that he regrets having to train children – and Ender especially – to wage war. His argument that he’s doing what’s necessary doesn’t completely hide his wishes that it wasn’t – he hates what he’s doing but will not be moved from his course. Anyone who gets in his way – like empathetic Major Gwen Anderson (Viola Davis) – is simply ordered out of it. 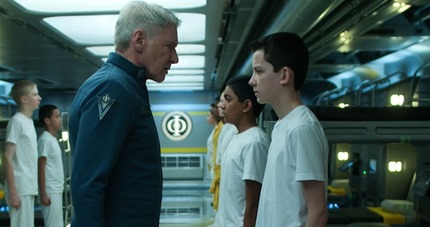 Butterfield gives Ender the resolve to survive, coupled with intelligence and perceptivity that enable him to be violent when he has to be – but no more than he has to be. He is a superb tactician as we discover almost immediately in his first onscreen encounter with a bully. He also asks questions when he doesn’t understand, or requires clarification. He is a very sympathetic character in a world where that’s not necessarily a good thing.

Petra, who becomes Ender’s first non-command mentor, is given a sense of warmth and mischievousness by Steinfeld. She’s willing to take risks when ender is moved to an unwelcoming squad at Battle School. Along with Bean, a street kid with potential, she gives Ender allies in a place where competition is brutal and allies are just strategic pieces.

There’s also the quintessential boot camp non-con, Sgt. Dapp (Dracula’s Nonso Anonzie), who makes the trainees’ lives miserable and a host of other roles that fill slots in puzzle but don’t get any real characterization – like Bernard (Conor Carroll), who goes from bully to ally for no other reason than that the plot requires him to do so – roles that have to be reduced to plot points when you adapt a book to film.

On the other hand, the visuals, especially in IMAX, are astonishing, spectacular, breathtaking – take your pick. They are gorgeous – whether we’re looking at a lake in the mountains or the Battle Room, or the Formic homeworld surrounded by asteroids. The action sequences are equally astounding. Technically, Ender’s Game is brilliant.

Considering that writer/director Gavin Hood’s last film was the execrable X-Men Origins: Wolverine, Ender’s Game is pretty terrific by comparison. If you’re looking for a couple hours of blockbuster fun, Ender’s Game will deliver that. If you’re looking for anything more than the most cursory examination of the book’s themes, you will be disappointed.