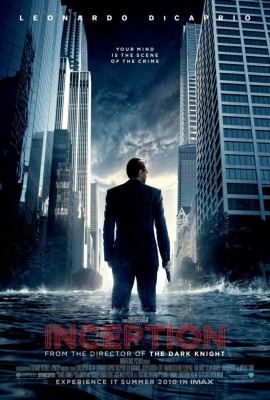 It’s time for me to do a Mea Culpa, things got hectic with my day job and I totally forgot to launch this contest last week. Our buddies at Warner Brothers have given us passes to the Baltimore Screening of Inception, it’s tomorrow night – July 13th!!!  I told them I wasn’t sure we have Baltimore readers, but I know Baltimore folks come to our DC Screenings all the time. So prove them wrong go to Baltimore.  Since this is so last minute and in Baltimore (but really Anne Arundel is only a 30 minute drive – easier to get to than going into DC), I’m not going to make you all send me an email. The code for the Tickets are after the break.

Get the Code for your Passes After the Break.

Acclaimed filmmaker Christopher Nolan directs an international cast in an original sci-fi actioner that travels around the globe and into the intimate and infinite world of dreams.  Dom Cobb (Leonardo DiCaprio) is a skilled thief, the absolute best in the dangerous art of extraction, stealing valuable secrets from deep within the subconscious during the dream state when the mind is at its most vulnerable.  Cobb’s rare ability has made him a coveted player in this treacherous new world of corporate espionage, but it has also made him an international fugitive and cost him everything he has ever loved.  Now Cobb is being offered a chance at redemption.  One last job could give him his life back but only if he can accomplish the impossible—inception.  Instead of the perfect heist, Cobb and his team of specialists have to pull off the reverse: their task is not to steal an idea but to plant one.  If they succeed, it could be the perfect crime. But no amount of careful planning or expertise can prepare the team for the dangerous enemy that seems to predict their every move.  An enemy that only Cobb could have seen coming.  This summer, your mind is the scene of the crime.

Simple, For your complimentary tickets to a special advance screening of INCEPTION in DC on Tuesday, July 13 log onto www.gofobo.com/rsvp and input the following code: ECLPQKX9 to download your tickets. Please be considerate and only print off a maximum of two passes!!!!!