Entertainment News for The Rest of Us
Sheldon Wiebe
EMExclusives 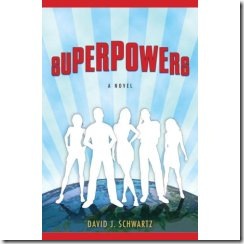 Now that superhero movies are practically a genre unto themselves, maybe it’s time to look at novels that deal with super characters – after all, they’ve been around for decades! One [The Amazing Adventures of Kavalier and Klay, by Michael Chabon] even won a Pulitzer Prize. Superpowers, A Novel, by David J. Scwartz, looks at the impact of superpowered people in the real world in a way that is fresh and insightful – but most of all, entertaining.

Beginning on Saturday, May, 2001, Superpowers relates the story of five college juniors who wake up after a party with superpowers as well as hangovers:

Jack Robinson: Grew up on a farm, works in a chem. Lab, and brews his own beer. Age: 19. Superpower: Speed.

Caroline Bloom: Has a flair for fashion design and a mother who’s completely out of touch. Works as a waitress for a lunatic boss. Age: 20. Superpower: Flight.

Harriet Bishop: Studied violin, guitar and piano… and was terrible at them all. Now writes about music for the campus paper. Age: 20. Superpower: Invisibility.

Mary Beth Layton: Is managing a 3.8, but feels like she’s working three times as hard as the people around her. Age: 20. Power: Strength.

Charlie Frost: Has an anxious way about him, and always looks like he’s on day 101 of his most recent haircut. Age: 20. Power: Telepathy.

At first, the powers are scary, because they just sort of manifest themselves without warning [Mary accidentally tearing a door of its hinges; Harriet wishing she was invisible and actually becoming so [and getting freaked out when she closes her eyes and can still see because they’re invisible, too]. That sort of thing. Then, they begin to think of using their new abilities – and the need to keep their identities secret – just like comic book superheroes.

Of course, there are problems. Charlie, for example, can’t barely stand to go out in public because people’s thought just seem crash down on him in waves; Caroline learns to love flying, but has to be ultra-careful to make sure no one is around to see her do so; Mary is constantly breaking things [glasses shatter in her hand; she accidentally bends a weight bar like a piece of limp spaghetti], and so on.

Once they’re all on the same page in regard to helping out, they find novel ways to do so. Charlie, for example, reads the minds of people whose surface thoughts indicate potential – or completed – crimes and sends anonymous letters to the police, detailing what they did, how they did it, and where to find evidence. Before long, Caroline is pressed into duty creating costumes for them – body suits with five-pointed stars on their chest, a different color for each – and suddenly the sleepy college town of Madison has its very own superheroes!

Unfortunately, Harriet’s dad, Ray Bishop, is a homicide detective and his work leads to investigate the All-Stars as they’ve come to be known. And that’s the least of their problems. Not only that, but there are term papers and other assignments that need to be done – and falling asleep in class gains one All-Star an additional ten-page paper on Oedipus. In short, life is just as bewildering and unfair to the five even after they gain their spiffy new powers. And we’re not even talking about the negative impact of these “gifts” [well, except for Charlie…].

Writer David J. Schwartz clearly understands both the college experience and the Marvel Comics concept of super characters with mundane problems – school work, paying the bills, acne and so on. His characters might have their figurative heads in the clouds as newly empowered super beings, but their actual feet are solidly on the ground in the real world.

The timing of the five’s gaining of the powers is no idle thing, either. Over the course of the book, the characters learn to make a difference and then learn that, sometimes, no matter who you are – and whatever your abilities might be – you just can’t. Superpowered people are still just people.

Schwartz uses a sixth character, Marcus Hatch, to tell the story, which he in turn bases on interviews with the one All-Star who would talk to him afterwards [as he puts it]. It’s a simple device that gives the story a unification that makes it seem even more real – despite the mystery of the group’s superpowers. An afterward, also by Hatch, opens the story up onto a worldwide level, while introducing an intriguing potential conspiracy at home.

Superpowers, A Novel works mostly because there are no supervillains. Schwartz doesn’t need them because the everyday, garden variety of ignorance and evil is more than enough to keep a real superhero busy all by itself.