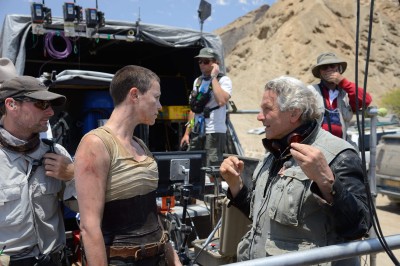 Michael Mann might be a hard act to follow, but El Rey Network Presents: The Director’s Chair has just the right choice in George Miller (pictured above with Charlize Theron). August’s second edition of The Director’s Chair will feature the only director to ever create franchises based on a post-apocalypse, vengeance seeking former cop and dancing penguins.

George Miller will be in the titular chair on El Rey Network Presents: The Director’s Chair on Sunday, August 30th. Follow the jump for further details.

Join director Robert Rodriguez as he sits down with fellow filmmaker George Miller for an hour-long conversation about Miller’s stunning career as director, writer and producer of some of modern cinema’s most beloved and iconic films.  Together, they trace the Australian-born director’s journey from practicing medical physician to creator of the visionary “Mad Max” series, which includes “Mad Max” (1979), “Mad Max 2: The Road Warrior” (1981), “Mad Max Beyond Thunderdome” (1985), and this year’s critically acclaimed, global box office hit “Mad Max: Fury Road,” starring Tom Hardy and Charlize Theron.

The two also discuss in revealing detail Miller’s successful transition into dramatic filmmaking with the Academy Award®-nominated medical drama “Lorenzo’s Oil” (1992), starring Susan Sarandon and Nick Nolte, which was greatly influenced by his medical training, the making of the supernatural comedy hit “The Witches of Eastwick,” (1987) starring Jack Nicholson, Cher, Susan Sarandon and Michelle Pfeiffer; the creation of the much-loved live-action/CGI family film “Babe” (1995) and its sequel, “Babe: Pig in the City” (1998); and Miller’s triumphant foray into fully-CGI animated films with “Happy Feet” (2006) which won an Academy Award® in 2008 for Best Animated Feature.

“El Rey Network Presents: The Director’s Chair” is a series of hour-long specials featuring the industry’s most cutting edge directors as they engage in a revealing and unexpected exchange about the world of filmmaking. The series provides access to one-on-one interviews between Rodriguez and some of cinema’s most iconic filmmakers. Past guests have included John Carpenter, Francis Ford Coppola, Michael Mann, Guillermo del Toro, Robert Zemeckis and Quentin Tarantino.

El Rey Network is a 24-hour English language network founded by maverick filmmaker Robert Rodriguez.  Curated by Rodriguez and his artistic collective, the network unites “the new mainstream” through badass content that awakens the renegade in everyone.  El Rey’s action-packed slate is anchored by signature series including the original drama, “From Dusk Till Dawn: The Series” which returns for a second season in summer 2015, the one-on-one interview program, “El Rey Network Presents: The Director’s Chair” and “Lucha Underground,” a freestyle wrestling series from Mark Burnett. El Rey Network’s lineup also showcases a wide range of iconic feature films and TV series including grindhouse genre, cult classic action, and horror/sci-fi. El Rey Network LLC http://www.elreynetwork.com/ is jointly owned by Robert Rodriguez and FactoryMade Ventures with a minority stake held by Univision Networks & Studios, Inc.