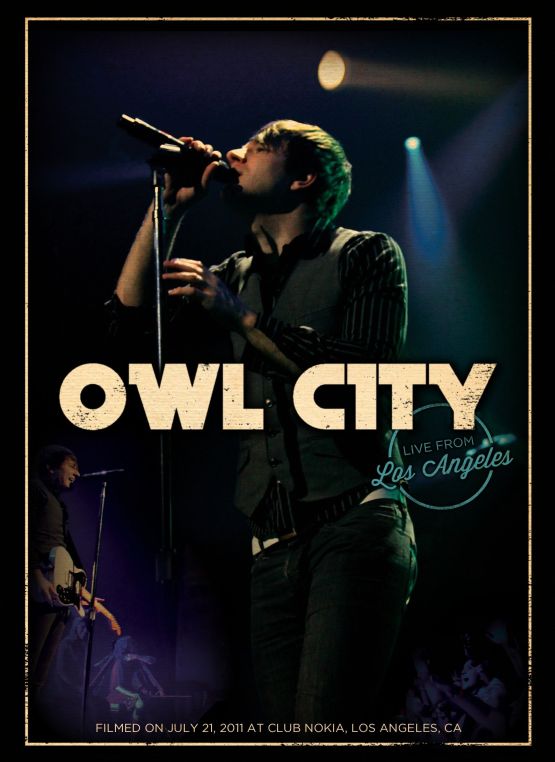 Eagle Rock Entertainment has recently released a live concert strictly for Itunes from Owl City entitled “Live From Los Angeles”. Owl City: Live From Los Angeles came solely to Itunes two days ago on December 6th, 2011 but this amazing concert will be coming to both DVD and Blu-Ray next year. More details from the press release after the jump:

Available Exclusively on iTunes December 6th 2011 in North America Only

Owl City is about to give the world an All Access pass into one of his headlining shows from the All Things Bright and Beautiful World Tour with the release of Owl City – Live from Los Angeles DVD. This will feature over 90 minutes of live performance, behind the scenes footage, exclusive interviews and more.

Filmed at LA’s Club Nokia this past July, the full 21 track concert will be released on iTunes in North America on December 6th with the preorder launching on November 29th. The DVD and Blu-Ray versions, to be released worldwide on February 7th, 2012, will include bonus features (backstage footage and an exclusive interview) in addition to the concert.

Owl City exploded onto the scene with the success of his major label debut Ocean Eyes. Released by Universal Republic Records in July 2009, the album topped the Billboard Rock, Alternative, and Dance/Electronic charts and was certified platinum in the U.S. It also spawned the quadruple platinum hit “Fireflies,” which hit #1 in 24 countries including twice in the U.S. Owl City then went on his first ever tour as the headliner and sold out shows across 4 continents, scarcely taking a break until it was time to record a new album. In the winter of 2010 the electro-pop aficionado went back into the basement where it all began and recorded his sophomore release All Things Bright and Beautiful, which was released on June 14th, 2011. That same week, Owl City kicked off another worldwide headlining tour bringing with him some new songs as well as his exciting live show. The 76 date trek took the band across North America, Europe, Asia, and Australia and the Owl City – Live from Los Angeles DVD release comes as the All Things Bright and Beautiful World Tour draws to a close.

Owl City – Live from Los Angeles will give fans a rare chance to see into the world of Owl City, experiencing the excitement of his live show intimately with the mastermind behind the project: Adam Young. Fans can view the trailer for the DVD at www.owlcitymusic.com now in anticipation of the release and preorder it here: http://itunes.apple.com/us/movie/owl-city-live-from-los-angeles/id479115367

Owl City: Live From Los Angeles is currently available on Itunes and will be available for DVD and Blu-Ray on February 7th, 2012. Owl City can be found on the web at:
http://owlcitymusic.com/home
http://www.facebook.com/owlcity
http://twitter.com/owlcity