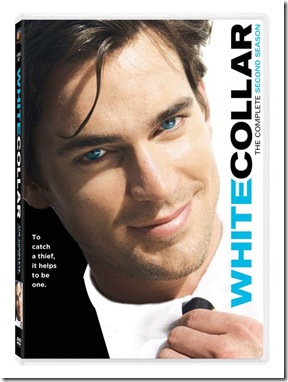 USA Network’s White Collar has a fun premise: Jailed white collar supercrook helps FBI Agent catch other white collar crooks. Thus con man/forger Neal Caffrey is released from prison into the custody of the FBI [more accurately, Peter Burke, the FBI agent who caught him – twice] as long as he works with Burke to take down others of his ilk.

White Collar’s first season finale concluded with the death of Neal’s [Matt Bomer] girlfriend, Kate [Alexandra Daddario] in an explosion, right in front of him. He and Kate were about to fly off into new identities but he stopped to say something to Peter [Tim DeKay] and the plane exploded, leaving him alive and determined who find out who killed her.

Season Two picks up with Peter coming off suspension [Neal was out of his GPS tracking anklet when the plane exploded] and Neal is back in prison. Peter gets him out – under the same terms as before – and when we see them again, Neal is testing the security of a bank because a heist artist called The Architect has served notice that he’s going to rob one of five Manhattan banks.

The Architect is but the first of many adversaries to plague Neal and Peter, but the season’s overarching arc is the hunt for whoever killed Kate – and what connection a mysterious 17th century music box has to them. In theory, Peter and his team – Agents Clinton Jones [Sharif Atkins] and Diana Barrigan [Marsha Barrigan] – are working on Kate’s death, but Neal, of course, is even more motivated than they are. Plus he has resources they don’t, in the person of Mozzie [Willie Garson], whose contacts of less than savory reputation are unmatched.

The weekly cases that Peter and Neal investigate are even more imaginative than in season one. My personal favorite, conceptually, is the group of college kids who are pulling off crimes patterned after Neal’s pre-prison exploits. Other nifty cases include am attempted hit on new recurring character Sara Ellis – in which Neal finds himself having to pretend to be the hitman; a terrific counterfeiting scheme using an outdate but genuine plate from the U.S. mint; cleared a framed FBI agent of selling witness locations [the same ep that introduced us to Mozzie’s safe house, Tuesday], and a case of corporate espionage that finds both Neal and Peter going undercover at the same company.

This is also the season wherein Peter to break out of a cell; Mozzie became a target and Neal got to warble a classic tune with June [Diahann Carroll] while an old friend of hers [Billy Dee Williams] tinkled the ivories. It’s also the season where the finale featured the most intriguing, non-violent cliffhanger I’ve ever seen [and wrapped two years of carefully built mythology at the same time].

Throughout the season the scripts were smart and sly; the performances witty, charming and, occasionally, inspired; the stakes became higher than even Neal and Mozzie could have expected, and the entertainment value soared.

It’s interesting that USA Network shows are referred to as ‘blue sky shows;’ certainly, they are fresher and more upbeat than most network schedules. What’s really interesting, though, is that their best series are the ones that the darkest edges: Covert Affairs, Burn Notice, White Collar. In the first two, the danger is largely physical – both shows have a certain amount of violence that is practically inherent in their premises. With White Collar, though, the primary stakes are more emotional – though there has been some violence [those bastards!]. Still, the toughest battles are not Peter and Neal’s tracking down of Kate’s killer, or Mozzie’s brush with death. No, the real battles are the inner battles the characters face – Neal loves his gig helping Peter almost as much as he loved working his scams and cons; Peter learns about Neal’s side of the coin in more than one episode and, despite his protestations to the contrary, kinda likes that.

Watching Neal and Peter experience these changes adds weight to any physical obstacles they may have to surmount – and with the season’s final scene, things get kicked up yet another notch. That’s great writing – and great execution.