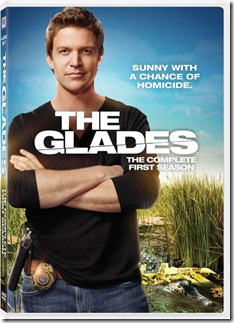 Imagine, if you will, a version of the classic The Rockford Files where Jim Rockford is a cop instead of a private investigator – and he’s been transplanted from sunny California to equally the sunny but muggier Florida Everglades [the resort town of Palm Glade], in particular. The result might be a lot like A&E’s surprise hit, The Glades.

The Glades is centered around a transplanted Chicago cop named Jim Longworth [Matt Passmore] who has transferred to the region under somewhat embarrassing circumstances [he was shot in the butt by his boss, who perhaps mistakenly assumed Longworth was sleeping with his wife] and would rather being playing golf [he got a sizable settlement but was no longer welcome there] – but these damnable murders keep demanding his attention.

For a guy who loves golf – and got a big settlement from his former boss – Longworth’s drive to do his job well [when he might not even need a job!] is a direct contrast to his seeming reluctance to work in the first place. In fact, when we first meet him, he’s playing golf with the medical examiner, Carlos Sanchez [Carlos Gomez] – which leads to our first example of Longworth’s love of the game.

He’s playing well enough to break 80, so he marks his ball as a crime scene so it won’t be disturbed while he investigates a murder. The murder – of a middle-aged woman – is odd not because the body was dumped in the glades, but because it’s headless!

The pilot introduces the basics of the show – quirky cop, quirkier murders and interesting supporting cast – with an off-the-cuff nonchalance that recalls the abovementioned Rockford Files. Longworth takes a very Rockford approach to working a homicide – he pokes and prods and asks pointed questions: essentially shaking things up until stuff starts to fall apart.

He gets a lot help from a young nurse, Callie Cargill [Kiele Sanchez], who has a young son, Jeff [Uriah Shelton] and whose husband is in jail. Callie is great for her medical knowledge and Sanchez and Passmore have great chemistry – though the potential for romance between them is frequently blocked by their jobs [she has more than one].

ME Sanchez, however, is an even better resource. He knows the ins and outs of the glades and local society, as well as having appreciation [if not necessarily approval] for Longworth’s style. Gomez also has an intern, Daniel Green [Jordan Wall], who is a computer whiz and thrilled to be working for the police department once he starts getting to help Longworth on his cases.

Some of The glades most interesting episodes include: A Perfect Storm [Longworth investigates a string of murders as a hurricane approaches], The Girlfriend Experience [the victim is an identity thief who stole Gomez’s identity], Cassadaga [Longworth and Gomez investigate the death of a ‘psychic advisor’], Booty [the death of a renowned treasure hunter could lead to pirate treasure] and Breaking 80 [Longworth’s job and passion overlap when a pro golfer’s friend and caddy is found dead on the fairway].

The Glades takes the concept of the ‘blue sky’ series and darkens it just the tiniest bit to create light summer viewing with a little bite. Most of the first season’s thirteen episodes are extremely entertaining, largely because the cast [especially Passmore and Gomez] are terrific. Plus, the series is shot on location in Florida, so you can practically feel the heat and humidity as you watch Longworth and Gomez go about their jobs.

You won’t find anything startlingly deep here – The Glades is not a work of staggering genius – but you will find a summer series that doesn’t pander to the lowest common denomination, either. It’s a fun, reasonably intelligent series that is worth investing the time it takes to watch it.

My biggest complaint about the DVD set is that its release date makes it available after the first two episodes of season two have aired. What genius planned that?

Grade: The Glades: The Complete First Season – B