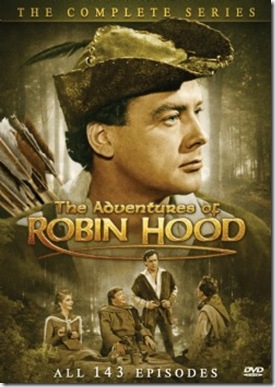 In the late fifties [1955-60], there was a fair bit of swashbuckling on TV – Zorro, Elfego Baca, The Scarecrow [all courtesy of Walt Disney] and more. Of the lot, none was more popular than the British import, The Adventures of Robin Hood, starring Richard Greene [who bore a passing resemblance to Errol Flynn] as Robin and sporting a theme song that was so universally known that Monty Python poked fun at it [along with the whole Robin Hood thing].

In its four seasons, the black & white swashbuckler produced 143 episodes and helped introduce an intriguing new method of storytelling – the building of a continuity. The premiere episode, The Coming of Robin Hood, told of how Sir Robin of Locksley returned from the crusades to find his properties in the hands of another – and himself to have been declared dead. Following a sly play by the Sheriff of Nottingham [Alan Wheatley], Robin found himself branded an outlaw and disappeared into Sherwood Forest, looking for the band of outlaws that was reputed to be hiding there.

The second episode, The Moneylender, detailed how Robin became the outlaws’ leader; the third, Dead or Alive, told how he first encountered Little John [Archie Duncan], and the fourth, Friar Tuck, found Robin enlisting the aid of a particularly earthy friar [Alexander Gauge] to his cause – and so things progressed.

While the fight scenes aren’t nearly as exciting as they seemed back then, the series is filled with intrigue and sold performances by Greene and Wheatley. Over the course of the series, Maid Marian was played by Bernadette O’Farrell and Patricia Driscoll. I tend to prefer O’Farrell who just seems more intelligent. Both Little John [Duncan and Rufus Cruikshank] and Will Scarlett [Ronald Howard and Paul Eddington] were also played by two actors. In both cases, I preferred the second actor, mostly because they provided more emotional resonance.

The episodes vary in quality, leading me to believe that they are taken from the best prints available, but except for a lack of contrast in extreme shadows, they are easy enough to enjoy. The sound quality is about average for the period.

As with other Mill Creek products, the packaging consists of a single oversized case with the eleven DVDs in black paper envelopes with cellophane windows for the title sides of the discs.

There are no bonus features.