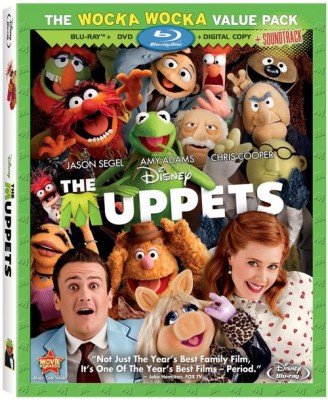 Life’s a happy song whenever the Muppets are around. Studio executives should take note; this is the kind of product you get when you put a film in the hands of someone who has obvious passion for what they are doing. Jason Segel championed this movie for years and it’s clear that everyone involved has a love of all things muppets.

Everything here just works. Its weird, colorful world is breath of cinema fresh air. The Muppets is a world where you just have to believe that these “muppets” are real and not question the whys and how of it. Never once did I question, hey how is it possible a muppet could have a human brother?

While Amy Adams doesn’t have much to do here but she’s great as Gary’s (Jason Segel ) long “suffering” girlfriend. She always feels like a 3rd wheel to Gary’s love of his muppet brother Walter (Peter Linz). The movie does an amazing job of setting up this relationship through a series of “aww” inducing montages in the beginning. A romantic vacation for two to California turns into three when Gary invites Walter to join.

At the Muppets rundown old studio Walter discovers that an evil oil baron named Tex Richman (played with great glee by Chris Cooper) – I loved the “maniacal laugh” joke and never got tired of it. This forces our gang to find Kermit and tell him of Tex’s evil plans. The only way to get the money they need to save the studio is to bring the gang back together and put on a benefit show.

The entire last 30 minutes of the movie is almost a literal Muppet Show episode and the movie itself becomes a surreal behind the scenes look at the shenanigans that goes on to create a live show. Can I take a moment to declare my love of Fozzie Bear? His bad jokes always puts a big smile on my face. What’s better and funny than Fozzie? EVIL hip-hop Fozzie = comedy gold!

Beyond the great story, the soundtrack is awesome! There’s not one missed beat, everything from the new “Life’s a Happy Day” to the Chickens covering “Forget You” to the always tear-inducing “Rainbow Connection” is flawless. Walter’s big moment did not work because it was not properly set up earlier in the movie. It seemed weird and out of the blue. It turns out there was a scene where he whistles earlier in the movie, sadly that got cut.

The Muppets is one of the best movies released in 2011. Wocka! Wocka!

What is there to say? I now expect flawless 1080p transfers of modern movies. The colors are bright and cheerful, there’s no grain, or rough spots – everything looks smooth and even. A movie like this does not need 7.1 DTS HD Audio, although Fozzie’s fart shoes did sound fantastic. The packaging is a standard three disc set up (DVD, Blu-ray and Digital Copy). On-screen navigation is easy to manage, but the on-screen animation does get annoying when you have to pause the video.

The highlight of this set is the fact that Disney goes the extra mile and includes a free copy of the full soundtrack! All 30 songs from the movie are here and this is a $12 value alone. Not only that, it also includes a digital copy of the movie. One sour note is the only way to download the soundtrack is from their horribly designed Disney Movie Rewards website. It took me a good half hour to figure out how to use it and actually get my music downloaded. Why they couldn’t provide a code to redeem on iTunes is beyond me.

I was planning on purchasing the Soundtrack anyway so the fact that it is included here for free makes up for a fairly thin Blu-ray package. Fans of the movie and soundtrack should get this.