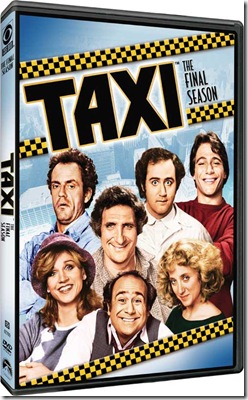 When the series premiered, the premise was that only Alex Rieger [Judd Hirsch] was driving a cab because that was what he wanted to do. The other drivers had different dreams: Bobby Wheeler [Jeff Conaway] wanted to be an actor; Tony Banta [Tony Danza] wanted to be a pro boxer; recent college student John Burns [Randall Carver] was trying to figure out what he wanted to do with his life, and Elaine Nardo [Marilu Henner] is a single mom looking for a second part-time job to pay the bills.

Over the course of the show’s run, characters left and were replaced – just like real life – but the each new departure and arrival added something different to the mix. Mechanic Latka was a mainstay and served as an outside viewpoint to give us a fresh perspective on life in America. When he married Simka, the couple added new depth to that perspective and enriched the comic possibilities their characters had barely explored when they were single.

For me, the fifth and final season of Taxi was as good as the first season. The changes in the cast seemed to jell in a new way, and it was because of the newcomers.

Reverend Jim might have been shy a few brain cells, but he was emotionally giving and always ready to help a friend – which paid dividends for the fifth season when he inherited a lot of money from his father, but was judged incompetent and his brother, Tom [Walter Olkewicz] given conservatorship over his inheritance.

In Jim’s Mario’s, when the gang helped him try to turn an investment in Mario’s, the restaurant next door to the cab company, into a worthwhile venture, we got to see Jim exhibit both some ambition and a surprising craftiness. And it was Jim, in A Grand Gesture, who got the crew into the spirit of giving when he gave everyone a thousand dollars with the condition that they had to find someone deserving to give it to by the end of their shift [watch for Tracey Walter in a nice bit in the first act]. Even Louie [Danny DeVito] got into the act – though his recipient refused to trust him!

Even though Hirsch’s Alex was supposed to have been the lead character, the show’s ensemble was so strong that it became a true ensemble production which was never shown better than in the series finale, Simka’s Monthlies. In the finale, Simka kept avoiding an appointment with the Department of Immigration to get her green card, and while it was up to Alex to tell her why she was acting like a crazy person, and persuade her to go the appointment, Kaufman and Kane carried the day and the series ended with only the couple onscreen.

Of course, there were twenty-four eps in the final season, but the final four were my personal favorites – and it seemed that everything built up to them, though the series wasn’t, strictly speaking, serialized. As one example: Louie’s passionate defence of Jim’s competence [Jim’s Inheritance] may have derived from Louie’s greed, but it set up his attempt to give that thousand dollars away, later].

Even the two-part A Taxi Celebration [Hello! Clip Show!] worked.

In the end, the series might have come to a conclusion, but the lives of its characters were not tied up in bow – they just kept on going, just like we all do.

Grade: Taxi: The Final Season – A+