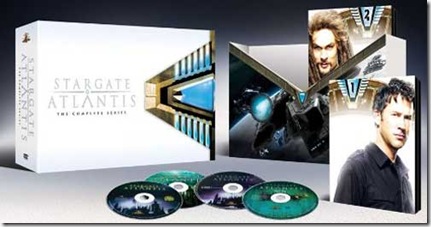 Stargate Atlantis premiered as the original Stargate series, SG-1, was going into its eighth season. It was immediately darker than the original – there was a key death in the premiere, and the alien race they encountered, the Wraith, didn’t require technology to suck the life from their victims. There was also the possibility that the team might not be able to return to Earth. The odds were stacked against the expedition – which was composed of members from around the world.

Sure, the main cast seemed, at first glance, to mirror the original SG-1 team – Lt. Col. John Sheppard [Joe Flanigan] was the cocky military maverick, much like Col. Jack O’Neill; Dr. Rodney MacKay [David Hewlett] was the resident scientific genius, a more insecure, male version of Major Samantha Carter; Ronon Dax [Jason Momoa] was the big, quiet lone survivor of his world, like Teal’c [but without a symbiote] – but there were differences that became readily apparent.

The expedition leader was a civilian scientist, Dr. Elizabeth Weir [Torri Higginson]; there was a second local member of the away team – Teyla Emmagan [Rachel Luttrell], and McKay had a foil in the Czech scientist, Dr. Radek Zelenka [David Nykl], and that was just at the beginning.

Although the Wraith and, in a big-time crossover from SG-1, the Replicators became the running villains of the series, there were plenty of other nasties that we hadn’t seen before – like the Genii, a race of seemingly less advanced humans who planned to use atomic bombs against the Wraith, but would exterminate any humans who discovered their technological advancement; or Michael [Connor Trinneer], the Human/Wraith hybrid who is created when their attempts to defang the Wraith threat by turning them human backfires.

Although not as innovative as Babylon 5, Farscape, or even SG-1, Stargate Atlantis racked up a solid following by developing strong, relatable characters and making a point of emphasizing the expedition’s international flavor. I’ve already mentioned the Czech scientist, Dr. Zelenka, but McKay was proudly Canadian [and very much the opposite of the polite Canadian stereotype] and the expedition’s chief of medical was Dr. Carson Beckett, a Scot.

Some of the series’ best episodes explored individuals – like season two’s Grace Under Pressure, which found McKay in a sinking shuttle having a conversation with a Samantha Carter [Amanda Tapping] that was a figment of his imagination; or the fifth season ep, Vegas, which explored the character of Sheppard, but the Sheppard of an alternate universe where he was not part of the Stargate program; or the fourth season ep, Reunion, which give us a closer look at Ronon Dax.

Another intriguing facet of SGA was the revolving door policy regarding the expedition leader. Dr. Elizabeth Weir was compromised by the Replicators and was replaced by [now] Col. Samantha Carter, who was, in turn, replaced by Woolsey. In each case, the new commander learned to adapt to the unusual circumstances of the Atlantis expedition – usually in a manner that was not pleasing to the IOA [an oversight committee that questions protocols used, or ignored, in Stargate Project operations] – and especially when former IOA investigator Woolsey became leader of the Atlantis expedition.

While Atlantis was edgier than SG-1, it didn’t shy away from humor. The matter of McKay’s spine [or lack of same] was a constant source of amusement – even more so when he showed uncharacteristic bursts of courage. And Col. Sheppard was a master of the snide remark; the sarcastic rejoinder – his exchanges with McKay were frequently highlights.

Overall, Stargate Atlantis was a smart, entertaining series with moments of high melodrama balanced by pure drama and varying degrees of humor. It made good use of the Stargate idea – one of the two best storytelling devices in sci-fi [along with Doctor Who’s TARDIS] – a device that could take its users anywhere and, possibly, any time, giving the series an opportunity to play with a multitude of genres.

Stargate Atlantis finished its run as superior to both the last five seasons of SG-1 and the first season [so far] of Stargate Universe.

Season One: Mission Directive featurettes for: The Storm, The eye, Sanctuary, Before I sleep, The Siege; Stargate Atlantis Set tour with Martin Gero and Peter DeLuise; Photo Gallery on Each Disc; Diary of Rainbow Sun Francks; Wraithal Discrimination – It’s Not Easy Being Green; A Look Back on season One with Martin Gero.

Season Four: Mission Directive featurettes for: Doppelganger, This Mortal Coil; A New Leader: Amanda Tapping Joins Atlantis; The Doctor is In: The Return of Paul McGillion; The Making of Trio; A Look Back at Season 4; Deleted Scenes; Photo Gallery on Each Disc; Production Design Gallery on Each Disc.

Season Five: Extended episodes: Vegas, Enemy at the Gate; Mission Directive featurettes for: Search and Rescue, Whispers, Tracker, Brainstorm; Showdown! Ronon Dax vs. Tyre; Bringing The Seed to Life; Tricks of the trade: Submerging the Stargate; Joe Flanigan: A Conversation with the colonel; Dr. Jackson goes to Atlantis; Building a Humanoid; The Life and Death of Michael Kenmore; Stargate Atlantis Goes to Vegas; Inside the Stargate Atlantis Costume Department; Deleted Scenes; Photo Gallery on Each Disc; Production Design Gallery on Each Disc.

The series comes in a showcase box with each season in a card stock folder and each disc secured in an individual slot, on a rubber spindle. The only real flaw to the packaging is the lack of a booklet listing episode, with taglines, and special features [the only way to learn who is on each commentary is to go into the features on the actual discs].

One thought on “DVD REVIEW: Stargate Atlantis: The Complete Series – Edgier Then the Original; More Fun Than the Latest Flavor!”