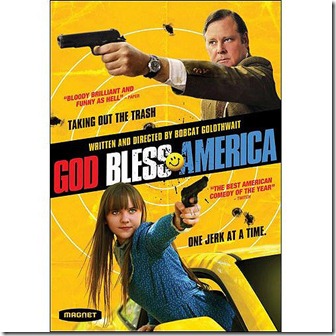 If you’ve ever been ticked off by a jerk who not only zips into that parking space you were heading for, but parked diagonally across its neighboring space as well; if you’ve ever wanted to wring the necks of a group of kids chattering through a movie, or put a definitive end to reality shows built around screaming, spoiled brats or self-indulgent bimbos, then God Bless America might just be the movie for you.

Frank (Joel Murray, Shameless, Mad Men) is a nice, middle-aged guy who has had a very bad day. Recently divorced, unfairly fired for sexual harassment he didn’t commit and being told by his doctor he has a terminal brain tumor, Frank has a bit of a meltdown. Suffering from a migraine that’s made worse by his loud, obnoxious neighbors – and a world of reality TV and crass commercials, he finally takes out a box containing a handful of medals and a pistol and… decides not to commit suicide.

Instead, he sets out to kill the obnoxious Chloe (Maddie Hasson, The Finder), banshee sixteen-year old who terrorizes her parents on a Happy Sweet Sixteen reality series – which he promptly botches and has to resort to gunplay to achieve. Only, there’s a witness: another high school girl, Roxy (Tara Lynne Barr, The Bold and the Beautiful, The Suite Life of Zack and Cody).

Fortunately for Frank, she, too, hates Chloe and isn’t about to tell anyone. Unfortunately, she would rather join him in his mission to bump off America’s meanest and most wilfully ignorant people. Frank accepts her offer, but makes it clear that he’s no pedophile – he won’t even objectify her to the extent of saying whether he thinks she’s an attractive or not!

The tag line for God Bless America is ‘Taking out the trash – one jerk at a time,’ and that’s exactly what Frank and Roxy do as a sweet kind of father/daughter relationship begins to build between them.

Like Goldthwaite’s other films, God Bless America is about something – in this case, the growth of wilful ignorance and the loss of the common courtesies that make life bearable when things aren’t going well. Frank and Roxy are our surrogates as they gleeful run through lists of people who deserve to die for their part in the decline of niceness in American civilization – everyone from reality TV stars and people who ‘high five’ at the slightest provocation, to people who set up the mentally challenged for laughs, and other serious creeps.

Between short, explosives bursts of taking out the trash, Frank and Roxy eat in diners, stay in classic motels and shop for clothes (a brief bit that ends with a funny visual quote from Bonnie & Clyde). When Frank’s migraines get to be too much, she helps him deal with them through an acupressure technique that amazes him. In returns, he grounds her as a person and gives her things to think about.

Eventually, a secret is revealed that splits up Frank and Roxy and, finally, things come to a head on the set of an American Idol knockoff, American Superstars, with Frank in speechifying mode (that Murray makes seem right and natural) before acknowledging Roxy (who is miraculously in the studio audience – just go with it, it feels right) and moving into a now inevitable conclusion.

Sometimes, people respond to gentle reminders when they stray off the path of civilized behavior; sometimes they require a bit more forceful touch. Sometimes, there’s just no persuading them. With God Bless America, Bobcat Goldthwaite takes both approaches, but extends them to a more forceful style – and, for those who won’t be persuaded, its logical, ultimate expression.

Joel Murray’s Frank is an Everyman pushed to his absolute limits, but still polite and compassionate at strangely appropriate times (check out the movie theater sequence) and Murray makes his ordinariness compelling.

Tara Lynne Barr makes the leap from Nickelodeon kid actor to complex lead (via TV soaps) with stunning ease. Her Roxy is a bundle of energy and teen neuroses that settle just below her natural exuberance. It’s a fine performance that meshes beautifully with Murray’s lower energy nice guy gone south.

As a director, Goldthwaite can be confusing. He has a tendency to play moments of complete insanity and high energy against stretches of more deliberate pacing and nuanced tone. What makes God Bless America work so well is that you never know when something is going to explode. Plus, y’know, there’s his off-the-wall humor that further plays with the film’s (and the audience’s) tension.

God Bless America is a marvelous film – definitely Goldthwaite’s best and when you consider his previous best was the astonishing World’s Greatest Dad, that’s saying something.