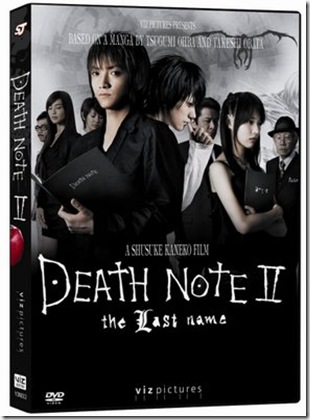 The premise is that a bored Shinigami [death god] name Ryuk [voiced by Shido Nakamura] dropped his Death Note where a recently bullied Light Yagami could find it. Light learns that the Death Note gives him the power to slay anyone whose name he records in the notebook – as long as he can form a picture of the person in his mind [he wouldn’t want to kill the wrong person…]. He promptly puts the notebook to good use, writing down the names of murderers who were never punished. Unfortunately for him, the sudden epidemic of dying criminals is noticed by the police, who request the aid of the master detective L to help them find the killer, dubbed Kira, and bring him to justice.

Given that hundreds of pages of manga were edited to fit four hours and twenty minutes of live action movie [less if you take into account the closing credits] – and that there’s not a lot of what you might call traditional action in the series – screenwriter Tetsuya Oishi has a pretty good job of adapting it.

Fujiwara is perfect for the intense Light, son of the local police chief, who starts out seeking justice before the power goes to his head, while Matsuyama captures the bird-like postures and movements of L perfectly. Add a second Kira, provided by a second Shinigami named Rem [Shinnosuke Ikehata] – a female TV/pop star named Misa Amane [Erika Toda], who has a monster crush on Light, and the complications just keep on coming. 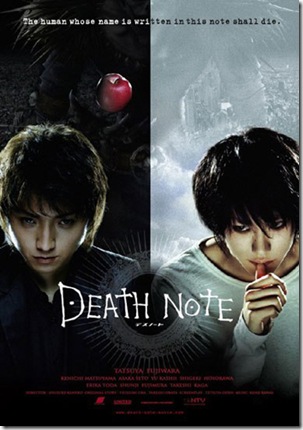 Death Note does a terrific job of setting up the story; introducing the main characters, and building suspense. Death Note: The Last Name, on the other hand, has to deal with all the complications that arise following Light’s acquisition of the Death Note and the advent of L. As a result, it’s a bit overstuffed and doesn’t quite have the pacing of the first film. Shusuke Kaneko, who directed both movies, does manage to keep the suspense building in the life and death chess game that is being waged between Light and L – especially after L decides that Light is a likely candidate to be the first Kira. The CG Shinigami, Ryuk and Rem, might not be quite as sophisticated as they could be, but that actually helps us buy into the characters who are not sophisticated in the least.

Overall, the Death Note saga, as presented in these two movies, is well done and very entertaining. VIZ Media, who produced these DVDs, are planning to release Death Note: L – the story from L’s perspective in the near future. If it is as much fun as these releases, I’ll be checking that out, too.