When assassin Eve [Zoe Bell] has a job go south on her, with tragic consequences, she somehow survives a knife through her skull but the injury finds her seeing her most recent, and unintentional victim – a fourteen-year old girl. 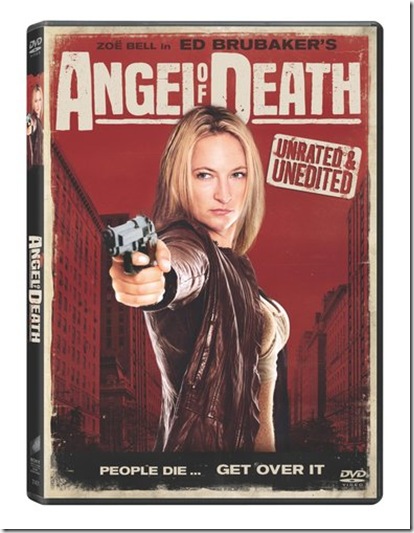 Angel of Death was written for veteran stuntwoman Zoe Bell, who first exhibited unexpected acting chops in Quentin Tarantino’s half of the Grindhouse double feature, Death Proof. Showing that Death Proof wasn’t a fluke, Bell is a towering presence in this feature cut of the web series, written by comics icon Ed Brubaker. The noir film follows Eve as she seeks redemption by carrying out the dead girl’s demand for vengeance.

Shot for a buck-and-a-half, or the Hollyweird equivalent thereof, Angel of Death looks and feels like a film with a much bigger budget. Director Paul Etheredge takes Brubaker’s script and almost literally runs with it – the film is almost pure adrenaline… though both Brubaker and Etheredge share a knack for knowing when to pause for breath, and a bit of raw emotion. Etheredge’s direction plays with both noir and comics conventions, using both noir angles and comic panel-like transitions to frame the story.

In true noir fashion, the violence is harsh and never looks balletic, or stylized. In true comics fashion, we learn as much about the characters through their actions as we do from the dialogue. Having Bell star means that she does her own stunts, thereby giving Angel of Death a layer of believability that we don’t usually get in this kind of film. Her face is in practically ever shot.

Angel of Death also features a number of cool appearances by genre actors. Ted Raimi has an emotion-packed scene in which he doesn’t get to say a word; Doug Jones plays a drug addicted mob doctor, and Lucy Lawless get to dress down as a hooker with a habit.

If you’re looking for a good, fun, violent time, Angel of Death is a good bet.

Features include: Audio Commentary with Brubaker and Bell; Making of Angel of Death; Writing, Ed Brubaker-Style; Casting and Angel: Zoe Bell as Eve; Zoe Bell’s Screen Test; Eve’s Tips for Killing, and Behind the Scenes.

Check out our DVD section for more reviews.