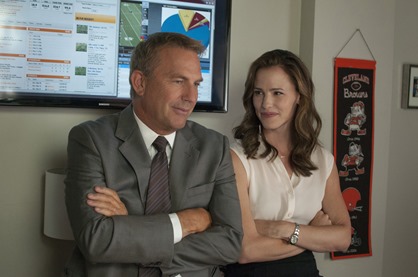 Kevin Costner has turned in some really good performances lately – in films ranging from forgettable to enjoyable to delightful. His best – and the best of his films in a while – is the beleaguered but savvy general manager of the Cleveland Browns in Draft Day. Like Moneyball, it’s a sports film that’s less about the sport than the behind-the-scenes business. It’s also corn, but really prime corn.

It’s twelve hours before the draft in a fictional version of the real NFL – you can tell its fictional, because the Seattle Seahawks have the number one draft pick overall – not something you’d generally associate with a Super Bowl championship team. Also, they’re looking to draft the best quarterback in college ball in years, Bo Callahan (Josh Pence, Gangster Squad).

Meanwhile, picking in seventh place are the Cleveland Browns, a team that has fallen on equally hard times in both fiction and reality. Sonny Weaver Jr. (Costner) is under the gun – team owner Anthony Molina (Frank Langella) has given him and ultimatum: do something to make a big splash, or join the unemployment line. Cap that off with Sonny living in the shadow of late father, legendary coach Sonny Weaver Sr., and you have a truly intriguing dynamic being built.

Then Weaver also has to stroke egos – Callahan, the overconfident QB; Vontae Mack (Chadwick Boseman, 42) a linebacker who needs an early first round selection but has made a couple of mistakes in his time college; Ray Jennings Jr. (real gridiron star Arian Foster), who could be a breakout running back, Cleveland’s current quarterback, Brian Drew (Tom Welling) – and fend off waves of bad attitude from Coach Penn (Denis Leary), who second guesses his every move and snarks incessantly. 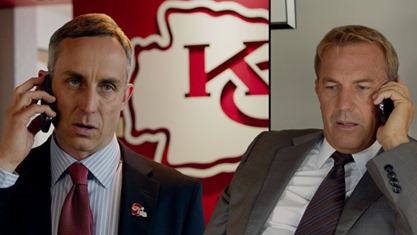 He also has to weigh trade possibilities that the team can afford – which is where Jennifer Garner’s Ali comes in as salary cap manager and who, just to makes things perfect, is secretly Sonny’s baby mama. Then there’s Sonny’s mom (Ellen Burstyn) who chooses this day to hold a memorial for Sonny Sr. – at the fifty-yard line of the practice field that’s been named after him.

Draft Day marks a return to form for Ivan Reitman – whose last good film was 2001’s Evolution. Working from a script by Scott Rothman and Rajiv Joseph, Reitman takes what could have a throwaway bit of corn and elevates it to the kind of corn that lasts – like Costner’s classics Bull Durham and Field of Dreams.

He does it by capturing the chaos of Draft Day and the complexity of the lives of his characters in an almost Altman-esque manner. People talk over each other; events in split screen moments spill over the edges, with characters occasionally moving in front of them leading into scene-shifting wipes.

He does it by taking a cast with great chemistry and letting them play – Draft Day might be Grade A corn, but it’s corn with surprising panache. He also refrains from going for the big laugh, instead letting the script’s dialogue crackle around Costner but letting him remain grounded. 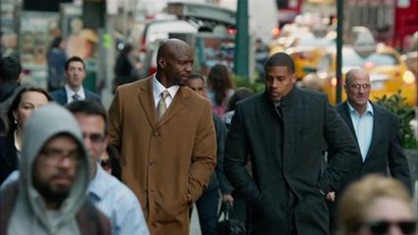 Reitman also takes advantage of Garner’s ability to handle rapid dialogue to balance Costner’s more measured delivery – not unlike that found in Spencer Tracy-Katherine Hepburn movies. He also allows minor characters to have moments that quicken or slow the pace at just right moments (Griffin Newman as Rick the Intern is one great example). It also helps that, although Ali is a bean counter, she’s also passionate about the game. It takes her relationship with Sonny to a very real place.

He also uses real people from the worlds of ESPN and the NFL – Chris Berman, Deion Sanders, Jim Brown and NFL Commissioner Roger Goodell appear as themselves; Terry Crews appears a Ray Jennings Sr. – to inject a dose of reality to the proceedings.

The script is clever enough that even a neophyte can follow what’s going on – though it means that first act isn’t quite as briskly paced as the rest of the movie. The result is a film that sports fans of both sexes will love – and has the potential to win over everyone else.

Draft Day is one of those movies that stand to do reasonably well at the box office and live on – and build a following – long after its theatrical run ends.