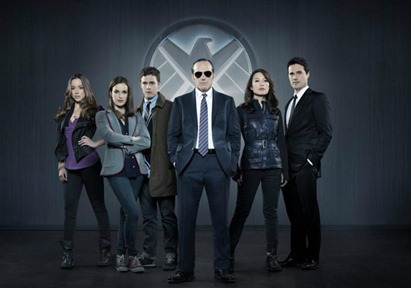 Now that I have your attention… If you missed the premiere of ABC’s Marvel’s Agents of S.H.I.E.L.D. (try saying that five times fast!), you’ll get another chance to check it out tomorrow night at 8/7C.

S.H.I.E.L.D. had the best numbers of a drama premiere in almost four years and had more than one million Facebook fans when it premiered. And, for the record (since it never appeared on ABC’s press site so I was unable to review it), the premiere was extremely good – balancing humor and drama in that peculiar way that only Joss Whedon seems able to pull off reliably. I’d give it an A- – only a few characters get any kind of development – but the plot is smart and, as with Whedon’s other shows, you know that everyone will be developed over time. Also, Lola.

The press release about the additional scheduling follows the jump.

On the heels of its debut as the season’s biggest new drama, ABC is set to rebroadcast the Pilot episode of “Marvel’s Agents of S.H.I.E.L.D.” on THURSDAY, SEPTEMBER 26 (8:00-9:00 p.m., ET). The show premiered as TV’s highest rated new drama in nearly four years. In addition, it received an unprecedented one million Facebook fans before its television debut, and those numbers are still climbing.

In the premiere episode, “Pilot,” it’s just after the battle of New York, and now that the existence of super heroes and aliens has become public knowledge, the world is trying to come to grips with this new reality. Agent Phil Coulson is back in action and has his eye on a mysterious group called The Rising Tide. In order to track this unseen, unknown enemy, he has assembled a small, highly select group of Agents from the worldwide law-enforcement organization known as S.H.I.E.L.D. (Strategic Homeland Intervention Enforcement and Logistics Division). The group’s first assignment together as a team finds them trying to track down an ordinary man who has gained extraordinary powers, powers that could have devastating consequences.

For more information on “Marvel’s Agents of S.H.I.E.L.D.,” visit ABC.com