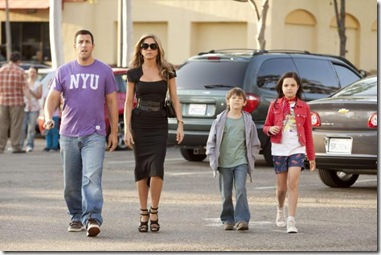 The film opens with young Danny [Adam Sandler] about to marry some mercenary shrew until he overhears some very important stuff that changes his mind. When he discovers that a beautiful woman finds him intriguing because he seems to be married, he keeps his wedding ring and turns it into a steady stream of one-night stands. He also changes his major from cardiac to plastics.

Then, while not wearing the ring, he meets Palmer [Brooklyn Decker] – think Bo Derek in `10 [though Decker is a much better actor] –and makes a real connection with her. Until she finds the ring in his pocket [she’s not snooping – he asked to get something out the pocket].

BAM! Connection over – because she thinks he’s married. The next thing you know, he’s telling her that he’s getting a divorce and the papers will be signed in a few days. She wants to hear from the future-ex’s lips, so he persuades his office manager, Katherine [Jennifer Aniston], to pretend to be his future ex – and she gets a fabulous wardrobe out of him to play the role properly. Before you know it, the three of them are finishing lunch when Katherine gets a call and, totally forgetting about the role she’s supposed to be playing, let’s slip that she has children. Now Palmer wants to meet the kids and the whole situation escalates. The less said about Danny’s best friend, Eddie [Nick Swardson] and his alter-ego, the better [suffice to say that Swardson is playing the Rob Schneider role here…].

I have to admit that I laughed a few times during Just Go With It, but probably not where I was supposed to. And while there’s no grotesque pool scene, there are the usual complement of pee and poop jokes – one of the latter is sufficiently gross that it could have equaled the infamous pool scene, but it’s in the middle of the night and handled deftly enough that it remains implicit rather than explicit.

Also, Just Go With It is a better film, technically, that Grown Ups. It has decent editing and continuity and, there’s actually something resembling a plot. Despite the inept writing, Aniston and Nicole Kidman [as Katherine’s college nemesis, Devlin] are somehow watchable for more than their looks [and both are in extremely good shape – good enough to make the exquisite Decker look average].

Speaking of Decker, she’s actually not terrible. Her Palmer is actually pretty likable, if dumber than a sack of hammers – it’s hard to buy anyone buying into buy Danny’s lies. With a decent script to work with, she could do well in future films – if being in Just Go With It doesn’t hurt her career.

As for whether you should see Just Go With It, if you think Sandler’s golden, you’ll go regardless – but if you’re one of those who’ve never liked his stuff before, well, those TV spots are very misleading. Tell him it’s a Sandler movie – and go shopping, or cure cancer. Whatever, just don’t bother with this hot mess of a film. It’ll make plenty of money without you.