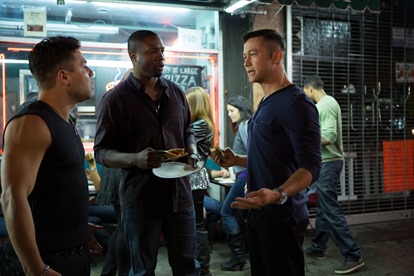 On the other hand, he is finally able to bring home a girl to meet his family – father Jon Sr. (Tony Danza), mother Angela (Glenne Headly) and oblivious sister Monica (Brie Larson) who seems grafted to her smartphone. He even starts taking a night class to better himself (guess whose idea that is…).

He meets a lovely older woman, Esther (Julianne Moore), in that class. She will, we are sure, be the reason he and Barbara break up. Nothing could be further from the truth.

In what seems, initially, to be a running gag (and it is funny), we chart Jon’s progress as a human being through his weekly trip to the confessional – followed by his reciting his penance while working out. Slowly, the focus of the film begins to change. Esther becomes more important; Barbara recedes.

Gordon-Levitt’s first film has a few things to say, though he never gets preachy, beginning with the way we are desensitized to the exploitation of women through the bombardment of hyper-sexualized images that surround us daily. There’s so little difference between the carefully considered and edited flashes of softcore smut he uses at key moments and the commercial clips that open the film, that it never seems like a particularly huge leap from accepting one and accepting the other. 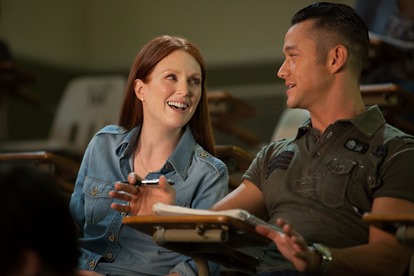 In an ironic twist that counterpoints Jon’s situation, Monica turns out to be the most observant person in the film, after Esther. This is brought home in one specific scene at the family dinner table and it’s a killer.

Gordon-Levitt directs Don Jon with an assurance that is impressive. Every frame seems considered, honed and buffed to the exact appropriate texture. He develops what could be almost be called an anti-romance over the film’s ninety minutes – and gets riveting performances from his cast.

Scarlett Johannson should get special notice for her take on Barbara. By the film’s end, she is revealed to be as ugly on the inside as she is lovely on the outside. It’s a bold journey that Johannson makes absolutely believable.

Brie Larson is also terrific as the seemingly oblivious Monica – whose moment of clarity is a total delight. Danza and Headley are perfect as the bickering parents of these two very different people.

Finally, Gordon-Levitt is exceptional as Jon. He makes the character’s growth as subtle and organic as possible. There’s never one moment when you’re not with him on his journey.