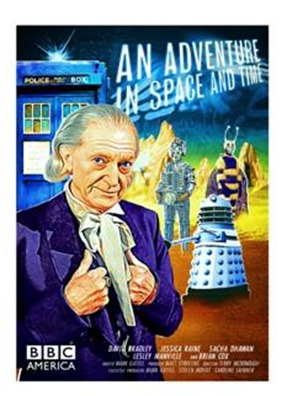 Circle Friday, November 22nd on your calendars. That’s the night An Adventure in Space and Time – the story of how the longest-running sci-fi series of all time, Doctor Who, came to be, premieres on BBC America. Taking influences as diverse as C.S. Lewis, H.G. Wells and Father Christmas and creating a show about a regenerating Timelord who travels through time and space in a Police Call Box could have been a complete disaster – instead, it was successful beyond anyone’s imagining.

An Adventure in Space and Time stars David Bradley (Harry Potter, Broadchurch) as William Hartnell, the man who played the First Doctor; and – as the unlikely team behind the show’s creation – Jessica Raine (Call the Midwife), as Verity Lambert, Sacha Dhawan (After Earth), as Waris Hussein and Brian Cox (The Bourne Identity), as Sydney Newman.

The story of how it all began stars David Bradley, Jessica Raine and Brian Cox

What do you get when you mix C.S. Lewis with H.G. Wells, and sprinkle in a bit of Father Christmas? An alien Time Lord exploring space and time in a Police Box spaceship called the “TARDIS” (Time And Relative Dimension in Space).  On November 23, 1963, a television legend began when the very first episode of Doctor Who was broadcast on BBC One.  Fifty years later, the genesis story is retold in a new BBC AMERICA co-production film celebrating the 50th anniversary of the franchise,  An Adventure in Space and Time, premiering Friday, November 22, 9:00pm ET/PT on BBC AMERICA.

Travel back to witness the genius that was the first Doctor, William Hartnell (David Bradley, Game of Thrones, Broadchurch) and the unlikely production team behind the series, Verity Lambert (Jessica Raine, Call the Midwife), Waris Hussein (Sacha Dhawan, After Earth) and Sydney Newman (Brian Cox, The Bourne Identity, X2: X-Men United). From writer and executive producer Mark Gatiss (Sherlock, Doctor Who), executive producers Steven Moffat (Doctor Who, Sherlock) and Caroline Skinner (Doctor Who, The Fades) and director Terry McDonough (Breaking Bad, The Street), the stylish drama reveals the struggles and ultimate triumph of the British series created to “keep the sports fans and kids hooked.”

“An Adventure in Space and Time is principally a human interest story you can enjoy even if you know nothing about Doctor Who,” says writer and executive producer, Mark Gatiss.  “You’ll see the story of some amazing people who come together under extraordinary circumstances to create this wonderful thing that is still with us today.”

An unlikely trio of misfits set out to create a genre series that all ages would love.  A 55-year-old actor conceivably at the end of a frustrating career, a former production assistant fighting to make her mark in television, and a foreign born, novice director were tasked with bringing a vision for an exciting new science fiction story to life.  William ‘Bill’ Hartnell, displeased with his career, was presented with a chance to break out of the hard-man roles he’d become known for.  And with the instincts of first time producer, Verity Lambert and first time director, Waris Hussein, The Doctor was born. As the success of the show grew, William went from unhappy curmudgeon to beloved television star who relished his career resurgence and found a new lease on life.  But all good things come to an end. How will Bill face leaving behind the part that has made him a hero to millions of children? And can the show survive without him? Journey back fifty years through space and time to witness the exciting beginning and untimely end of the First Doctor in this touching drama. 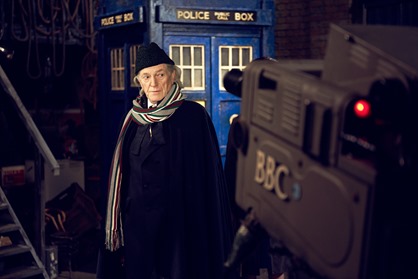 THE DOCTOR – “We can’t have Doctor Who without Doctor Who, can we?” – William Hartnell

Aged 55, William Hartnell was already a well established character actor primarily known for playing gruff, military parts.  Unhappy with being typecast, Hartnell was approached about playing the lead in a new children’s drama. Initially reluctant, he accepted the role which would change his life and make him a beloved household name.  Serving the series from 1963-1966, Hartnell’s Doctor was a doting yet difficult father figure and fierce opponent.  But behind the character, Hartnell, committed to his role, saw his world changing rapidly and his health taking a turn for the worse.  As those he’d come to rely on moved onward and upward, he was left alone to carry the show they’d built together on his shoulders.  A feat that ultimately proved too difficult for him to complete.

Mark Gatiss on David Bradley:  “I’d had David Bradley in mind for the part of William Hartnell for some time and I probably asked him before I should have!” says Gatiss.  “I was watching the Queen’s Diamond Jubilee regatta from the National Theatre, and asked David then and there and he responded ‘I’ve just done one!’ [David Bradley had appeared as Solomon the trader in Doctor Who’s “Dinosaurs on a Spaceship”].  I explained that this was a chance to play William Hartnell in a very different story and he was thrilled. He’s absolutely magnificent in the film. He plays Bill Hartnell’s journey from a grumpy old man to a pied piper figure with touching brilliance.”

THE PRODUCER – “If feathers don’t ruffle, nothing flies…” – Verity Lambert

Newman needed a producer for his new show and was determined that, having worked with her before, Verity Lambert was the right woman for the job. At the time, there were no female executives at the BBC so this appointment was groundbreaking.  He described her as “bright, gutsy and full of piss and vinegar.” Lambert enjoyed great success producing Doctor Who until 1965 and was later behind huge hits including The Naked Civil Servant, A Cry in the Dark and Jonathan Creek. She was awarded an OBE (Order of the British Empire) for her services to film and television production in 2002 and passed away in 2007. The Doctor Who Christmas special from that year “Voyage of the Damned” is dedicated to her memory.

THE DIRECTOR – “It’ll never work…when do we start? – Waris Hussein

British-Indian television director, Waris Hussein, was a surprise choice to direct the very first episode of Doctor Who. At 24, he was young and relatively new to the BBC, having joined only three years previously as a trainee. He returned to the series to direct the seven part 1964 adventure “Marco Polo,” the entirety of which is currently missing. 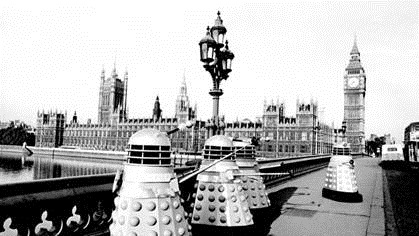 As Head of Drama for the BBC, and a life-long science fiction fan, Canadian film and television producer, Sydney Newman, was responsible for the idea and the development of this new sci-fi series.  With successful credits including The Avengers and The Forsyte Saga, Newman wanted to find a producer who had “piss and vinegar in their veins.” Making history with his vision, Newman brought on BBC’s first female producer to bring his creation to life.

The Daleks – the mangled and mutated remains of the Kaled people, placed in metal war machines by the Kaled’s chief scientist, first appeared in the series in 1963, earning the show 10 million viewers.

“So what do I know about anything…” – Sydney Newman

Mark Gatiss on the film’s importance:  “This is a story that I’ve always wanted to tell. In fact I pitched it for the 40thanniversary ten years ago and now it’s finally happening! I wanted to write it because I grew up with Doctor Who and even though Jon Pertwee was my Doctor, the legend of how the show began has always been there for me, in my blood. From how the show started small, then along came the Daleks, and ultimately, how the part changed William Hartnell’s life – this is a story that had to be told.”

William Russell was cast as school teacher, Ian Chesterton, in the very first story of Doctor Who and continued to play the role until the 1965 adventure “The Chase.” Since then he has performed in numerous theatre and television productions and has been an avid supporter of Doctor Who, lending his voice to numerous audiobooks and commentaries. He also appears in An Adventure in Space and Time.

An established stage actress, Jacqueline Hill, played the role of history teacher Barbara Wright and became one of the first people to travel through space and time in the TARDIS. Hill’s character left in the same episode as William Russell’s Ian Chesterton. Shortly afterwards she gave up acting to raise a family but returned to the series in 1980 to play high priestess Lexa in “Meglos” alongside Fourth Doctor, Tom Baker. Hill passed away in 1993.

Young actress Carole Ann Ford won the role of the Doctor’s granddaughter, Susan Foreman after an initial appearance in Z-Cars. She played the character until 1964 when she became the first companion to leave the TARDIS when Susan stayed on a future Earth to rebuild it after a Dalek invasion. Ford stayed in acting until 1997 and reprised her role as Susan for the 1983 episode “The Five Doctors.” She also appears in An Adventure in Space and Time. 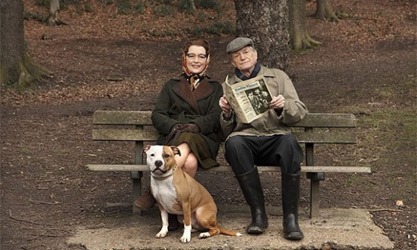 An Adventure in Space and Time is a co-production between BBC Cymru Wales and BBC AMERICA.

BBC AMERICA delivers U.S. audiences high-quality, innovative and intelligent programming. Established in 1998, it has been the launch pad for talent embraced by American mainstream pop culture, including Ricky Gervais, Gordon Ramsay, Graham Norton, and successful programming formats including ground-breaking non-scripted television like Top Gear and top-rated science-fiction like Doctor Who. Owned by BBC Worldwide, the commercial arm of the BBC, BBC AMERICA has attracted both critical acclaim and major awards including two Emmy® Awards, five Golden Globes® and ten Peabody Awards. The channel attracts one of cable’s most affluent and educated audiences and is available on cable and satellite TV in 80 million homes. It broadcasts in both standard and high-definition, with content available On Demand across all major digital platforms. Online, www.bbcamerica.com is the place to go to dig deeper into pop culture with a British twist. Follow us on www.twitter.com/bbcamerica.