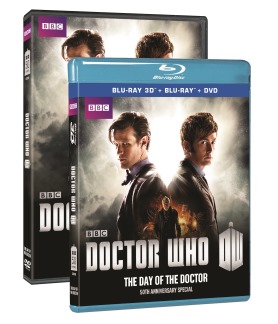 There are so many things to like about The Day of the Doctor – from its weapon with a conscience (appearing as Billie Piper’s Rose Tyler in punky chic torn hose and raccoon eyes) to the Tenth Doctor’s (David Tennant) romance with Queen Elizabeth I (Joanna Page); from ‘different cases, same software’ to Zygons; paintings that are slices of frozen time, to Kate Lethbridge-Stewart (Jemma Redgrave) referring to all her assistants as ‘Osgood.’

The plot is centered on a previously unknown version of The Doctor – the Warrior Doctor (John Hurt) who utterly destroyed both the Timelords and the Daleks – the one regeneration of The Doctor he has always striven to expunge from his memory. Of course, while writer/director Steven Moffat is dealing with this most cosmic of Doctor Who storylines, he also has a secondary (by a hair) plot with the Zygons returning to replace world leaders and other influential figures with Zygons – Zygons being shapeshifters, after all.

Moffat manages to weave plotlines to bring together Doctors Ten and Eleven (Matt Smith), in Elizabethan England, for a brief exchange before dropping the Warrior Doctor into their location (it all has to do with The Moment – that previously mentioned Gallifreyan weapon with a conscience.

The Day of the Doctor is filled with delights large and small for the long-time Whovian – Lethbridge-Stewart’s latest Osgood wears a very familiar scarf; Ten has an exchange with Eleven in the TARDIS that mirrors the Second Doctor’s (Patrick Troughton, for those of you keeping score) exchange with Nicholas Courtney’s Brigadier Alastair Gordon Lethbridge-Stewart in The Five Doctors; there’s the famous Clara utterance, ‘Run, you clever boy’ – but not from Clara; the circuitous inextricably of The Doctor’s plan to save the Earth and The Moment’s attempt to redeem The Doctor(s).

And of course, there’s the ultimate ‘It’s so crazy it just might work’ plan The Doctors concoct to Change Everything – a plan so difficult, and requiring so much power, that it needs thirteen – count ‘em – thirteen Doctors (including our first look at Peter Capaldi’s Doctor’s eyes) and TARDISes (TARDII?) to pull it off, maybe.

Somehow, Moffat pulls off the ultimate Doctor Who adventure – with all the cosmic weirdness, silliness, drama and poignancy (the final sequence in the gallery brings nostalgic tears even when I just think about it) that any Whovian could ask for. And it all makes that unique, off-the-wall kind of sense that can only be made by Doctor Who.

The home video release includes: both online minisodes – The Last Day (a Gallifreyan soldier faces horror on his first day on the job) and The Night of the Doctor (which connects 1996’s Doctor Who TV-movie to the rest of the Doctor Who timeline(s); Doctor Who Explained – the 50-minute special that gives an overview of the series from 1963 to the present; and a fifteen-minute Behind The Scenes featurette.

In a perfect world, Doctor Who: The Day of the Doctor would have contained commentary tracks on The Day of the Doctor and both minisodes, as well as a more detailed look behind the scenes, but what we’ve got is such fun that it’s hard to complain (maybe the eighth-season set could include that stuff?).

Grade: Doctor Who: The Day of the Doctor – A+