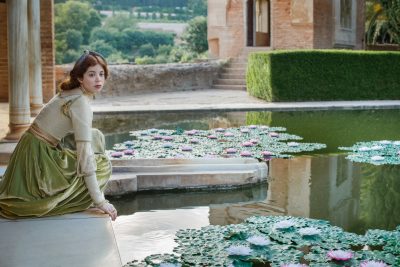 Catherine of Aragon (Charlotte Hope) is the strong-willed young Princess of Spain, who has been promised the English throne since she was a child.

The Spanish Princess is the Starz limited series adaptation of the novel by Philippa Gregory – which tells the story of the young princess in a foreign court.

The Spanish Princess premieres on May 5th. The trailer follows.

Santa Monica, Calif. – March 7, 2019 – Starz, a Lionsgate company (NYSE: LGF.A, LGF.B), today announced that the STARZ Original Limited Series “The Spanish Princess” will premiere Sunday, May 5th, 2019 at 8PM ET/ PT on STARZ in the U.S. and on the STARZPLAY platform in the U.K. and Germany. Additionally, STARZ today released the official trailer of “The Spanish Princess,” the third installment following the Golden Globe® and Emmy® award-nominated STARZ Original Miniseries “The White Queen” and the critically acclaimed STARZ Original Limited Series “The White Princess.” Produced by Playground and All3 Media’s New Pictures, the Limited Series is drawn from the global best-selling novels, The Constant Princess and The King’s Curse, written by Philippa Gregory.

“Catherine of Aragon has generally been depicted negatively, as an unwanted and burdensome wife, so this story of her early years as a strong, driven young woman and shrewd political player is a fresh and untold tale. We are also especially pleased to be able to bring into the light the inspiring story of people of color in early Tudor England,” said showrunners Emma Frost and Matthew Graham.

About “The Spanish Princess”
Returning to the world of Tudor royal court intrigue, “The Spanish Princess” is a vivid and captivating story told uniquely from the point of view of the women, which also sheds light on a previously untold corner of history: the lives of people of color, living and working in 16th century London.

Catherine of Aragon (Charlotte Hope) is the strong-willed young Princess of Spain, who has been promised the English throne since she was a child. She arrives in a grey, rain-lashed England with her glorious and diverse court including her ladies-in-waiting Lina () – a Spanish noble of African Iberian descent – and the sweet and free-spirited Rosa (Nadia Parkes). When her husband Prince Arthur dies suddenly, the throne seems lost to Catherine until she devises an audacious plan and sets her sights on the new heir, the charismatic and headstrong Prince Harry who will one day rule as King Henry VIII.

Acclaimed writer Emma Frost (STARZ Originals “The White Queen” and “The White Princess,” “The Man in High Castle”) and Matthew Graham (“Life on Mars,” “Electric Dreams,” “Dr. Who”) serve as showrunners and executive producers. Executive producing with Frost and Graham are Colin Callender (“The White Queen,” “The Dresser,” “Wolf Hall”) and Scott Huff (“Howards End,” “The White Princess,” “The Missing”) from Playground and Charlie Pattinson (“The White Queen,” “Requiem,” “The Missing 1 & 2”) and Charlie Hampton (“Shameless,” “Wild at Heart,” “Inspector George Gently“) from All3 Media’s New Pictures.