Entertainment News for The Rest of Us
Sheldon Wiebe
Comic Books, Movies 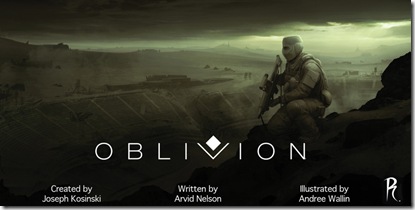 Radical Publishing is proud to announce that Disney has acquired the film adaptation of OBLIVION, based on Radical Publishing’s illustrated novel created by Tron: Legacy director, Joseph Kosinski, written by Rex Mundi creator, Arvid Nelson, and with illustrations by Andrée Wallin. OBLIVION will be directed by Joseph Kosinki and will be produced by Radical’s President and Publisher, Barry Levine, and Kosinski. Radical Studios’ Executive Vice President Jesse Berger is signed on as Executive Producer. Kosinki is repped by Verve and Anonymous Content while Radical is repped by CAA and David Schiff.

In a future where the Earth’s surface has been irradiated beyond recognition, the remnants of humanity live above the clouds, safe from the brutal alien Scavengers that stalk the ruins. But when surface drone repairman Jak discovers a mysterious woman in a crash-landed pod, it sets off an unstoppable chain of events that will force him to question everything he knows.

“We’re thrilled to partner with Joe Kosinski on OBLIVION,” said Barry Levine, president of Radical Pictures.  “Joe is one of the most creative forces in filmmaking today.  From the moment he teamed with Radical to produce the book and film, he had such a clear vision of the OBLIVION landscape and universe.  Add to that Joe’s successful partnership with Disney on Tron: Legacy, and you have all the ingredients for a phenomenal action/adventure film.”

OBLIVION, the 128-page illustrated novel, will be released in Summer 2011 and will feature prose, combined with over 40 fully painted landscape renderings. OBLIVION will be distributed worldwide through Random House.