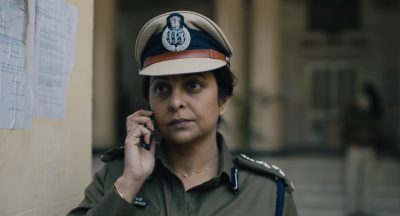 Season one is inspired by and follows the notorious December 2012 investigation by the Delhi Police into a devastating rape of a young woman that reverberated across India and the world.

Mumbai, 29 January, 2019 – Delhi Crime, a seven-part series written and directed by award-winning Indo-Canadian filmmaker Richie Mehta, will be available to Netflix members worldwide from March 22, 2019. The police-procedural thriller, produced by Golden Karavan and Ivanhoe Pictures, will premiere worldwide at Sundance Film Festival on January 29 in the Indie Episodic category.

Season 1 of Delhi Crime is inspired by and follows the notorious December 2012 investigation by the Delhi Police into a devastating rape of a young woman that reverberated across India and the world. Throughout seven hour-long episodes, Delhi Crime captures the complexities of the scrutiny, the emotional toll on the investigating team, and their determination to bring the perpetrators to justice in a fraught environment.

Over six years of research went into the making of the series, which was shot on location in New Delhi. Richie Mehta (Amal, Siddharth), conceived the show during a conversation with Neeraj Kumar, a former Commissioner of the Delhi Police, who introduced him to the investigating team, and offered access to hundreds of pages of legal documents that were prepared as part of investigation. Overwhelmed by the brutality of the incident, and determined to bring to light the details of the investigation, Mehta realized that the zeal and passion of the police in providing closure to a nation would be best portrayed in the form of a series.

Mehta said, “The making of Delhi Crime has been a personally transformative journey; speaking to every individual involved, retracing the paths that the police took during the course of the investigation, and hearing of the determination that it took for the case to be closed, despite severe limitations. I hope that we’ve been able to provide context, catharsis and open once again a difficult conversation that must be had about the forces that enabled this brutality.”

Simran Sethi, Director, International Originals, Netflix, said, “Delhi Crime is an important story told with sensitivity and responsibility, and we are honored to help bring this series to Indian and global members. It is honest and emotional and powerful. Shows like this bring a much-needed lens to the lived reality of women around the world. Watching this series is an affecting experience, and we are sure it will be as meaningful of an experience for Netflix audiences as it was for us.”

The deal was negotiated by Robert Jesuele on behalf of Golden Karavan and Brian Kornreich on behalf of Ivanhoe Pictures.

About Netflix
Netflix is the world’s leading internet entertainment service with 139 million paid memberships in over 190 countries enjoying TV series, documentaries and feature films across a wide variety of genres and languages. Members can watch as much as they want, anytime, anywhere, on any internet-connected screen. Members can play, pause and resume watching, all without commercials or commitments.

The mission of the mini-major is to be the new differentiator, a new-era TV studio that, through collaborative partnerships with strategic producing partners and creative filmmakers, will share engaging stories with the widest audiences possible, even if that means pushing boundaries and taking risks.

With a full development slate, the company will supply compelling content from the region for a straight-to-digital release on premium global streaming platforms and broadcasters across the world.

Past Ivanhoe projects include the enormously successful Golden Globe-nominated comedy Crazy Rich Asians, a co-production with Warner Bros. from director Jon Chu (G.I. Joe: Retaliation) and starring Constance Wu and Michelle Yeoh that has now grossed over $238M to date worldwide and is now the 6th highest grossing romantic comedy in the U.S. of all time; the South Korean hit The Wailing from director Na Hong-jin, which remains the second highest-grossing opening weekend for Fox in Korea behind Avatar; and the popular Hindi-language horror series Ghoul for Netflix India.

Additionally, Ivanhoe has established a number of key partnerships to produce local-language films for global audiences, including a deal with Blumhouse Productions to develop local-language genre content in India.