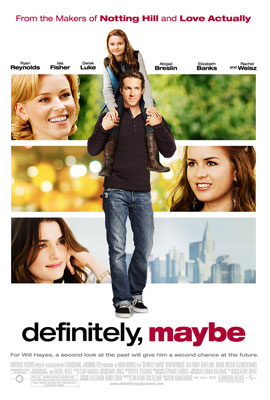 Will Hayes [Ryan Reynolds] is about to become divorced. To make his day even worse, his ten-year old daughter, Maya [Abigail Breslin], has just experienced her first sex education class and is kind of hung up on the relevant technical terms. How could the despondent Will’s day get any worse? How about by having his rather perceptive daughter see through his attempts to camouflage his pain. When Maya asks how he met her mother, Will tells her the story – changes some names and some facts, just to make it a little more fun for Maya to guess which of the women he married. 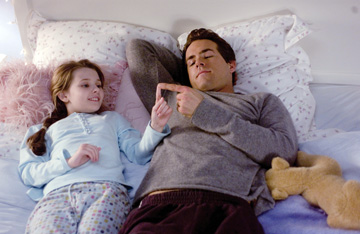 In New York, he meets a vivacious, spontaneous redhead, April [Isla Fisher] and a brunette intellectual, Summer [Rachel Weisz], who takes a crusty old writer as a lover. In between his romantic adventures, we get moments of political commentary – not enough to bore, but enough to make his commitment real [later on in the film, he wonders how Clinton managed to ever get elected – if he can’t define a simple word like “is,” how can he ever hope to handle one of the hard ones, like “truth”].

Throughout the story, Maya interrupts to ask questions or make observations. Breslin makes this seem completely natural, even though Maya is clearly smarter than her dad – or at least more observant. When Maya tells Will, “Trust me, daddy, you’re not happy,” hearts in the audience just break.

Sure, the premise of the movie is similar to the sitcom How I Met Your Mother. And it plies some of the same philosophical ground as a number of other romantic comedies [the idea that timing is especially important in making a relationship work; the idea that the same traits that attract two people may be the same traits that eventually drive them apart]. As an old British playwright once noted, “There is nothing new under the sun.” 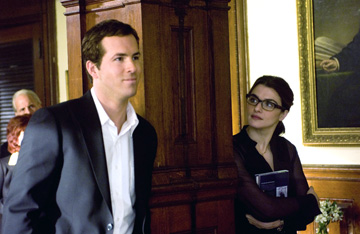 What makes Definitely, Maybe stand out is that it deals honestly with the messiness of relationships without ever actually becoming a mess itself. Well, that and some remarkable performances from Ryan Reynolds [who has been remarkable in a host of pretty awful films, so it’s nice to see him being remarkable in a really good one], Abigail Breslin [showing that her Oscar® nomination was not a fluke], Elizabeth Banks [who hasn’t done anything this good since Slither], Rachel Weisz [without whom, I’ll be passing on The Mummy 3] and Isla Fisher [whose energy seems to be unlimited].

The sharp script is equally sharply directed by its writer, Adam Brooks who, with the release of Definite, Maybe can now be forgiven for Bridget Jones: The Edge of Reason. Unlike that film, Definitely, Maybe sparkles like one of those delightfully odd screwball comedies of the forties [like George Cukor’s The Philadelphia Story – though it may fall a wee bit shy of that impressive level of excellence].

Part of the reason the film is smart is that Brooks understands that things/people/relationships sometimes just fall apart for no really big reason – and that a happy ending doesn’t necessarily have be marriage and “happily ever after.” It’s probably not a huge spoiler to say that one of the film’s happy ending is, in fact, Maya herself. I’ll leave to you to see the film for the other one.