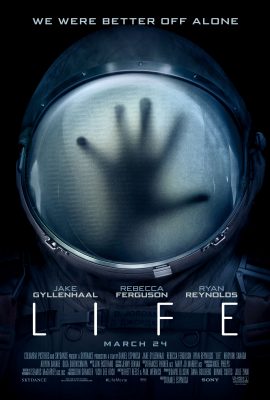 SXSW also announced a number of late additions to its program – including the film adaptation of David Leitch’s adaptation of the manga hit Atomic Blonde, starring Charlize Theron, James McAvoy and John Goodman.

Austin, Texas, February 22, 2017 – South by Southwest® (SXSW®) Conference and Festivals (March 10-19, 2017) announced the World Premiere of Life directed by Daniel Espinosa as its Closing Night Film on Saturday March 18, 2017 at the Zach Theatre. Columbia Pictures and Skydance’s Life is a terrifying sci-fi thriller about a team of scientists aboard the International Space Station whose mission of discovery turns to one of primal fear when they find a rapidly evolving life form that caused extinction on Mars, and now threatens the crew and all life on Earth.

“We are thrilled to close out the 2017 SXSW Film Festival with such a special film as Life,” said Janet Pierson, Director of Film. “Our audiences will love this taut space thriller’s twists and turns as well as its amazing cast.”

“I’m so honored that Life has been chosen as the closing film at South by Southwest,” added Daniel Espinosa. “The people that flock to Austin each year are some of the most engaged and passionate fans of film out there and are the perfect audience to introduce our visceral sci-fi thriller. I hope that, with Life, we find new ways to entertain them, terrify them, and thrill them.”

Life is a terrifying sci-fi thriller about a team of scientists aboard the International Space Station whose mission of discovery turns to one of primal fear when they find a rapidly evolving life form that caused extinction on Mars, and now threatens the crew and all life on Earth. Cast List: Jake Gyllenhaal, Rebecca Ferguson, Ryan Reynolds, Hiroyuki Sanada, Ariyon Bakare, Olga Dihovichnaya (World Premiere)

Visions filmmakers are audacious, risk-taking artists in the new cinema landscape who demonstrate raw innovation and creativity in documentary and narrative filmmaking.

In the wake of a devastating personal tragedy, a struggling would-be filmmaker finds a revealing home video in an old camcorder purchased on eBay and takes off with his cat on a cross-country road trip to find its owner: “The Man Whose Arms Exploded” Cast: Parker Smith, Gregg Valentino (World Premiere)

Virtual reality and augmented reality technologies are finding new ways to enhance our ability to perceive the world that surrounds us, and in many instances they are redefining how we experience the world.  The 38 projects presented in our new Virtual Cinema emphasize storytelling, ingenuity and also showcase how other industries are embracing this new medium.

Love in the age of obsolescence.

An intimate tour of the White House that gives the viewer extraordinary access to explore the iconic institution’s profound history – from the past eight years of the Obama administration to defining events of the last two centuries.

The pioneering design documentary Helvetica premiered at SXSW in 2007, and kickstarted a wave of dozens of design films that have been released since. Join director Gary Hustwit for this special 10th Anniversary screening of Helvetica.

New for 2017, the Interactive, Film, and Music badges will now include expanded access to more of the SXSW Conference and Festivals experience. Attendees will still receive primary entry to programming associated with their badge type, but can now enjoy secondary access to most other SXSW events.

SXSW dedicates itself to helping creative people achieve their goals. Founded in 1987 in Austin, Texas, SXSW is best known for its conference and festivals that celebrate the convergence of the interactive, film and music industries. The event, an essential destination for global professionals, features sessions, showcases, screenings, exhibitions, and a variety of networking opportunities. SXSW proves that the most unexpected discoveries happen when diverse topics and people come together. SXSW 2017 will take place March 10-19, 2017.