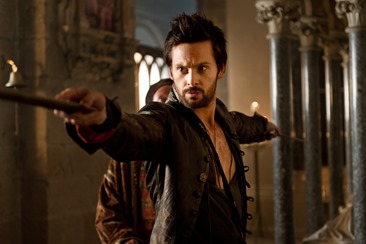 Pasadena, CA – January 10, 2014 –Starz announced today that the anticipated second season of the historical fantasy “Da Vinci’s Demons,” an original series created by David S. Goyer, who most recently wrote the screenplay for Man of Steel and its untitled sequel as well as co-writer of The Dark Knight trilogy, will premiere on STARZ in the U.S. on Saturday, March 22nd at 9pm ET/PT.  The ten-episode drama, produced by Adjacent Productions, follows the ‘untold’ story of the world’s greatest genius, Leonardo da Vinci, during his turbulent youth during the Renaissance.  Starz greenlit “Da Vinci’s Demons” for a second season following its record-setting first season weekend debut on STARZ on Friday April 12, 2013. Outside of the United States and English-speaking Canada, “Da Vinci’s Demons” is distributed internationally by BBC Worldwide, in partnership with FOX International Channels (FIC) who broadcasts the series to audiences in 125 countries in Latin America, Europe, Asia, the Middle East and Africa following Starz’s exclusive premiere in the U.S.

Brilliant and passionate, the 25-year- old Leonardo da Vinci is an artist, inventor, swordsman, lover, dreamer and idealist. As a free thinker, with intellect and talents that are almost superhuman, he struggles to live within the confines of his own reality and time.

Starring Tom Riley (“Monroe,” I Want Candy), as the title character, season two of “Da Vinci’s Demons,” finds Florence thrown into chaos in the wake of the Pazzi conspiracy.  Lorenzo is gravely ill and Leonardo da Vinci must push the limits of his mind and body to defend the city against the forces of Rome. While the Medicis go to unthinkable lengths to deal with new threats, da Vinci continues on his quest to find the fabled Book of Leaves and uncover the secret history of his mother.  He’ll come to realize that he has lethal competition in his quest — new enemies who may be even worse than the forces of Pope Sixtus.  His search will take him to faraway lands and force him to reevaluate everything he knew about the world and his own history.

In addition to his high profile film credits, Goyer served as script consultant and story developer for “Call of Duty: Black Ops,” and “Black Ops II,” respectively, the most successful video game franchise of all time.