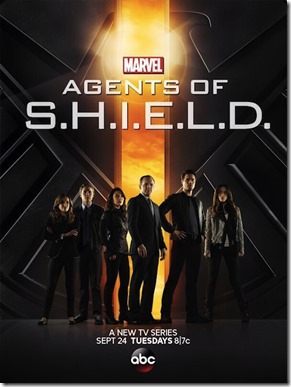 If you’re going to D23 Expo 2013, also know as the Ultimate Disney Fan Event, you might be one of the lucky ones to catch a screening of Marvel’s Agents of S.H.I.E.L.D. – hosted by Jeph Loeb, and Executive Producer on the series. The screening will take place at the Anaheim Convention Center on Sunday, august 11 at 3 p.m.

BURBANK, Calif. – August 6, 2013 – Guests at the D23 Expo will be among the first to see the highly anticipated one-hour drama “Marvel’s Agents of S.H.I.E.L.D.” on Sunday, August 11 at 3:00 p.m. in the D23 Expo Arena. Marvel’s Head of Television & Series executive producer Jeph Loeb will introduce the screening, taking place during the ultimate Disney fan event, August 9-11, at the Anaheim Convention Center.

The series begins where “Marvel’s The Avengers” left off. It’s just after the battle of New York, and now that the existence of Super Heroes and the incredible has become public knowledge, the world is trying to come to grips with this new reality. Agent Phil Coulson (Clark Gregg) is back in action and now has his eye on a mysterious group called The Rising Tide. In order to track this unseen, unknown enemy, he has assembled a small, highly select group of Agents from the worldwide law-enforcement organization known as S.H.I.E.L.D. (Strategic Homeland Intervention Enforcement and Logistics Division). The S.H.I.E.L.D. team has a mission: To investigate the new, the strange and the unknown around the globe, protecting the ordinary from the extraordinary.

“Marvel’s Agents of S.H.I.E.L.D.” premieres on ABC TUESDAY, SEPTEMBER 24 at 8:00 p.m., ET, but guests at the D23 Expo have the opportunity to see this dynamic show over a month before it debuts.

The D23 Expo—The Ultimate Disney Fan Event—brings the entire world of Disney under one roof, providing attendees with unprecedented access to Disney films, television, and theme parks. For the latest D23 Expo 2013 news, visit D23Expo.com. To be part of the D23 Expo conversation, make sure to follow @DisneyD23 and tag your tweets with #D23Expo.

The name “D23” pays homage to the exciting journey that began in 1923 when Walt Disney opened his fledgling studio in Hollywood. D23 is the first official club for fans in Disney’s nearly 90-year history. D23 gives its members a greater connection to the entire world of Disney by placing them in the middle of the magic through its quarterly publication Disney twenty-three; a rich website at D23.com with members-only content; and member-exclusive discounts and special events for D23 Members throughout the year, highlighted by the D23 Expo in Anaheim, California, August 9–11, 2013.

Marvel Entertainment, LLC, a wholly-owned subsidiary of The Walt Disney Company, is one of the world’s most prominent character-based entertainment companies, built on a proven library of over 8,000 characters featured in a variety of media over seventy years. Marvel utilizes its character franchises in entertainment, licensing and publishing. For more information visit www.marvel.com.