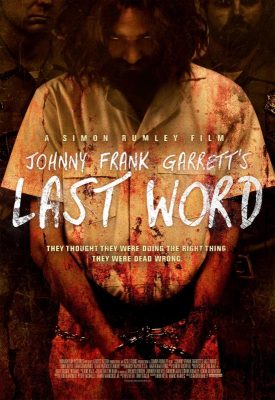 Convicted of killing a nun, Johnny Frank Garrett goes to his execution maintaining his innocence. His last act is to curse everyone and anyone even peripherally connected with his death.

Johnny Frank Garrett’s Last Word will be available on VOD on March 14th. Check out the trailer after the break.

“A vivid unsettling thriller directed with considerable aplomb and even more energy.” – Variety

Based on a true story, a nun was murdered in her convent bedroom in Amarillo, Texas on Halloween 1981. The police arrested a young man, Johnny Frank Garrett, who always maintained his innocence but he was found guilty and sentenced to death. On the night of his execution, he wrote a curse letter condemning the people and their families who helped send him to his demise. Shortly after Garrett’s death, members of the community start mysteriously dying. One of the jurors takes it upon himself to break the curse when his son is suddenly struck with a life-threatening illness.

Written by: Tony Giglio (Chaos), Ben Ketai (The Forest), and