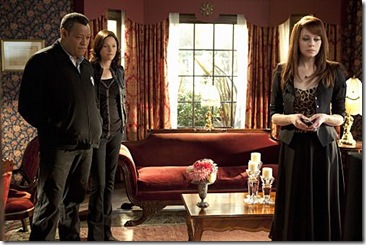 It’s been a while, but this week, CSI [CBS, Thursdays, 9/8C] brings back one of its all-time favorite recurring characters – Lady Heather. It’s an unusual episode because it looks into role playing as therapy, the concept of ‘human pets’ [not a fictional creation for the show] and cyber-bullying.

In Unleashed, a woman in a catsuit is found dead after being mauled by a mountain lion. When Ray [Laurence Fishburne] and Sara [Jorja Fox] investigate, they track down a mysterious Dr. K. from the woman’s appointment book and discover that she’s Dr. [formerly Lady] Heather Kessler [Melinda Clarke].

Elsewhere, Nick [George Eads] and Dr. Robbins [Robert David Hall] are flagged down by a man who claims a neighbor is dead. When they investigate, they find a dead seventeen-year old girl, hanging by a belt, in her closet. She’s pregnant – and Dr. Robbins has to perform a C-section to save the baby.

The mauled woman is Iona Vail, a social worker who worked at a battered women’s shelter and had suddenly quit. It’s through Dr./Lady Heather, that the role playing as therapy comes to light – with a very unusual variation, ‘human pets,’ that provides an unusual suspect in her death.

The possible suicide, Maria D’Orio, might not be suicide – a torn picture suggests a possible killer, as does the grandmother’s refusal to visit her granddaughter. Further investigation leads to the possibility of cyber-bullying.

Unleashed is pretty much a standard episode of CSI. It is built around evidence and investigators’ theories as they put increasing amounts of evidence together in the forensics format that has made the show so popular. What elevates it beyond the show’s usual high standards, is the combination of unique cases that involve subjects that are in the news, and the presence of Dr. /Lady Heather – who has obtained her doctorate and gone into mainstream practice as a sex therapist. Well, that and a revelation about Ray that is precipitated by the former dominatrix and relates to a certain serial killer who shares one aspect of his DNA..

Unleashed looks and feels like a standard episode of CSI – it is well written, briskly paced and features solid performances by its entire ensemble – until it presents its more out there elements [both based firmly in fact, which makes them even more unsettling] and those elements resonate with the featured investigators. At that point, Unleashed becomes the best episode of the season, so far.

The script, by Ed Whitmore and Anthony E. Zuiker, shows some serious research – or a very up-to-the-minute series consultant – and gives us more than the usual number of character moments. Brad Tanebaum’s direction keeps the series’ style and pace up to speed without losing any of those character moments. Unleashed is a superior episode on a series that remains, after all these years [it’s season eleven!] one of the best procedurals on television.