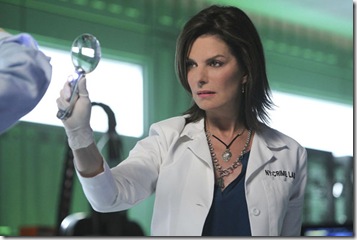 The 34th Floor gets off to a quick start with Jo’s discovery, and ramps up when Det. Mac Taylor [Gary Sinise] arrives back at the lab. Somehow, the dead woman managed to circumvent some pretty solid security to get to the 34th floor and he wants to know how!

Once it’s learned that the dead woman worked in the building, it’s easy enough to find out who she is, but the reason for her death is a little more difficult. Before it’s over, the investigation will involve two me with whom she had affairs – Rudy Aronika [Lawrence Monoson], who worked in the same office, and Alex Brodevesky [Sean Macguire], the owner of the business – and an exclusive thief, Theodore Westwick [Brett Tucker], who only takes money or goods worth more than $50,000.

Meanwhile, Lindsay is dealing with the fact that she killed a man – though after one session, she’s determined not to go back to see the department mandated shrink, Dr. Morgan Jefferson [Jane McLean].

Give writers John Dove and Paul Veasey kudos for an imaginative crime and a complicated aftermath, but while I’m sure that weirdness might happen in real life, it doesn’t feel believable here. On the upside, they do make Lindsay’s situation very plausible. Their introduction of Danville – and the absence of Stella, for that matter – is very nicely done.

Director Duane Clark keeps the wheels turning in that unique CSI way and yet, keeps The 34th Floor from feeling like just another disposable one-hour procedural. If the actual crime being investigated didn’t feel so odd/wrong, this would’ve been the best CSI:NY ep in a long time [it’s definitely better than some of the soap operatic stuff from last season].

One thought on “CSI: New York Welcomes Sela Ward’s Jo Danville With a Murder in the Lab!”