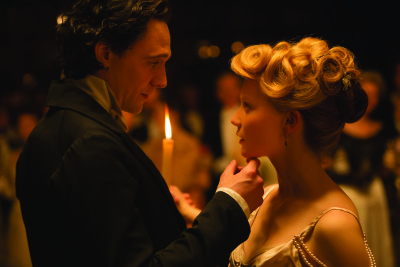 As someone who enjoyed Hammer and American International horror films in the seventies, I found Crimson Peak to be breathtaking both as an exercise in Gothic horror and as an application of modern resources to a very traditional type of tale.

Though Crimson Peak is a horror tale with ghosts, it is not really a ghost story – people are far nastier than ectoplasm here.

Edith Cushing (Mia Wasikowska) is a modern woman in 19th century America. Not for her the balls and finishing schools and narrow confines of the traditional women’s role. Instead, she’s a writer, a dreamer and we are told, not terribly sociable – and loving supported by her father, Carter (Jim Beaver).

When her father’s referral to a publisher comes to fruition, however, the man first enquires about the ghosts in the story – to which she replies that they are a metaphor for the past. His suggestion, to make the novel more palatable, is to add a bit of romance – spurring her to type out her manuscript so that it her feminine handwriting won’t unduly influence any other publishers.

Meanwhile Sir Thomas Sharpe (Tom Hiddleston) and his sharp-edged sister, Lucille (Jessica Chastain) are in town seeking financial backing for Sharpe’s invention – a clay-mining machine that he hopes will rejuvenate his family’s clay mines and restore their fortune. 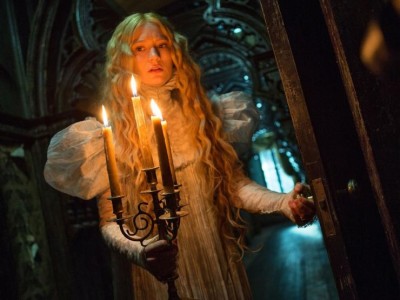 While there, he meets Edith and is immediately captivated, but her father heads off that potential relationship before it can be truly started – as well as refusing to provide Sharpe’s badly needed backing.

Shortly thereafter, a shadowy figure kills Carter and, (we assume) after a suitable mourning period, Thomas and Edith are wed and she moves into Sharpe’s home – a once-magnificent manor with more rooms than Thomas has counted and as many holes and ghosts.

Crimson Peak opens with a disheveled Edith standing outside, stating ‘Ghosts are real. This much I know,’ and recounting the remembrance of her mother’s ghost appearing to her shortly after her death when Edith was a girl. Later a ghost in Sharpe’s home whispers ‘Beware Crimson Peak’ – other, bloodier apparitions appear a few times.

Written by director Guillermo Del Toro and Matthew Robbins, Crimson Peak rattles along at a fair pace, revealing secrets about the uncomfortably odd brother and sister and putting Edith’s life in peril. The sets are amazing (they built the house – that is not CG); the effects are superb – but while being very, very creepy the film follows a very predictable path and the genuine scares are few. 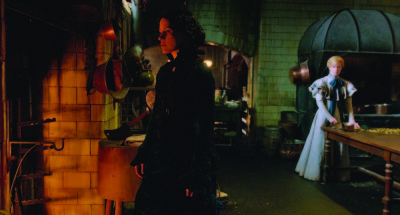 Where the film is somewhat subversive (as all Del Toro’s films are to some extent) is in the characters: Thomas seems to be a very self-assured, competent and even masterful person – though nothing could be further from the truth. Lucille seems daunting physically, but very much a lesser presence – again, not so much.

Edith seems together and capable as the film opens, but as it progresses, she seems more and more of the damsel in distress – which is underscored by her friend Alan McMichael (Charlie Hunnam) learning that she might be in danger and setting out to rescue her. Again, things are not quite as they seem.

Crimson Peak feels like one of Roger Corman’s Edgar Allan Poe movies in style – grand settings (here actual; in Corman’s films, more suggested) – with Hiddleston playing a character that would not have been, at least superficially, familiar to horror immortal, Vincent Price.

Beaver and Burn Gorman (as a particularly seedy detective) are superb and, with Wasikowska, give the florid film some semblance of grounding. Hiddleston and Chastain play Thomas and Lucille with straight ahead verve – in contrast to what their characters’ realities actually are.