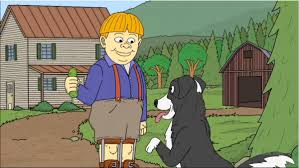 Mr. Pickles is one of Adult Swim’s latest mature cartoon to hit Sunday nights with its premiere on September 21, 2014.  Mr. Pickles is the Goodman’s family dog, who incidentally likes pickles.  But he is no Lassie.  And do not expect Scooby Doo or Snoopy either.   Behind those puppy dog eyes lie a wicked streak of violence in this seemingly innocent canine.  The series revolves around six year old Tommy Goodman and Mr. Pickles as they commute from their home to Old Town, an old-fashioned community being taken over by modern appliances.  I had the chance to chat with the talented creators Dave Stewart and Will Carsola about Mr. Pickles. 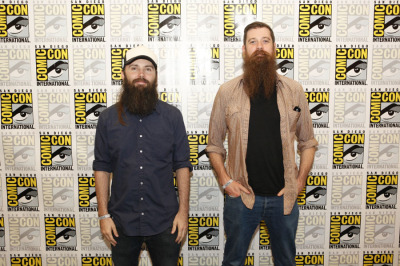 (left to right) Dave Stewart and Will Carsola

Creators Dave Stewart and Will Carsola relocated from Virginia to Los Angeles and embarked on the adventure known as Hollywood.  Dave wrote and acted in scripted/animated comedic shows, which included “Funny Or Die Presents” “Pumpkin and Bubby”, and “Pretend Time”.  Will Carsola is also an actor and writer in such scripted/animated comedic shows as “Funny Or Die Presents”, “Pumpkin and Bubby” and “Teenagers From Uranus”.  “Pumpkin and Bubby” was nominated for a SWSX grand jury awards.   This inseparable writing duo continues to bring comedy to our tv screens.

Can you give us a summary and let us know what “Mr. Pickles” is about?

Will:  It is about an old fashioned town set in modern times and the loveable Lassie dog Mr. Pickles.  Everyone thinks he’s a hero but he is actually an evil killer psychopath who loves his best friend, the little boy Tommy.

How did both of you meet and come together in creating “Mr. Pickles”?

Dave:  We met working in a restaurant in Richmond, VA.  We’ve been making sketches and short films pretty much ever since then.  We started out going on some scavenger hunt. We had only been friends for one week.  We started making videos and never stopped.  We worked on a handful of projects over the years.  Adult Swim eventually came to us and asked us to pitch some ideas.  We came up with an idea that they were interested in and they asked us to come up with five more ideas. Mr. Pickles was one of those ideas.

Out of the four or five ideas, they liked “Mr. Pickles” the best then?

What was the inspiration for Mr. Pickles?  Was it based on an actual dog?

Will: Neither Dave and I watched Lassie that much.  We weren’t huge Lassie fans.  The way it came about was the way Dave and I write. We pour out ideas and try to make the other laugh.  The idea for Mr. Pickles came out of one of these.  We just expanded on the idea from there.  It wasn’t based on any dog in particular.  Since then, Dave’s dog has inspired moments with Mr. Pickles.

Were there any challenges you faced in getting the show picked up by Adult Swim?

Dave:  I have to say,  creating a tv show is like grocery shopping.  You just get what you want and leave.

Dave:  Yes, I feel there are always challenges.  Will and I have always had an attitude that everything we worked on,  we’ll figure it out.  We always know that we are going to get through it.  It’s going to work out and we’re going to hang in there.

Will:  Everything Dave and I work on, we try to keep it fun.  In anything, things can be hard and stressful.  In those moments,  we try to remind ourselves to keep it fun.  At the end of the day, you’ll love what you’re left with.

Dave:  There are moments too where it’s a lot of work and a lot of stress, but I think it takes Will reminding me or me reminding Will.  Remember what we’re stressing about right now.  This is our job.  When it’s bad, it’s never bad. 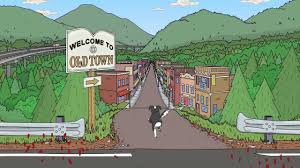 How did you find the voice actors you cast?

Will:  We had known Jay Johnston for a while.  We asked him to come in.  He fit the part perfectly.  He is so versatile and so funny.  His voice was the perfect old fashioned dad voice.  He is also constantly doing improv.  As far as Frank Collison and Kaitlyn Robrock, they just blew us away.  They were amazing.  When we heard Brooke Shields was interested in playing Mrs. Goodman, we thought, ” Yeah right”.  We didn’t take it seriously.  Then they came back and said she really wanted to do it.  Once we heard her voice, it was perfect.

Is there much change between the pilot and the upcoming episodes?

Will:  The only change which is insignificant is that Mrs. Goodman  is more tame and motherly.  In the pilot, she was a little more sexual and a little more crazy.  In writing the first season, we wanted her to be very motherly and a homemaker kind of mom.  People around her can be crazier so there is a bigger contrast.  There are still times when Mrs. Goodman goes crazy or gets drunk or goes on some crazy rampage when she’s mad.  Those moments are set aside for her.  Brooke is so funny in those moments.  For the craziness with Mr. Pickles and the craziness of the town’s characters, it’s important for the main family, especially the mom and dad, to be very innocent and very down to earth.

What can audiences expect to see that makes this show stand out?

Will:  The show stands out because of Mr. Pickles.  It has a bit of that normal sitcom feel but Mr. Pickles  has the absurd comedy feel, which is violence.  It is done in an over the top way.  I never found it offensive the way other people might.  There is always a bit of a social commentary element on our show that we like to hit on.  That appeals to one crowd.  Then there are absurd jokes and outlandish characters that appeal to another crowd.  There is a little of something for everybody.

Dave:  A good way to sum up the show is that it is an old fashioned town corrupted by the modern world and lots of **** on top of that. 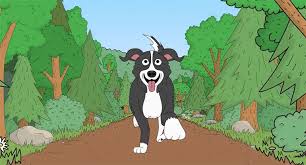 Tune in every Sunday night at 11:30pm on Adult Swim!