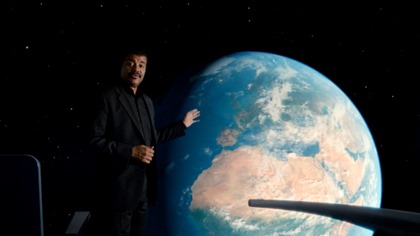 Fox and National Geographic Channel will host a special sneak preview of the first episode of Cosmos: A Spacetime Odyssey at the first-ever White House Student Film Festival on Friday, February 28th. The preview will be introduced by the show’s executive producer/writer/director, Ann Druyan and the show’s host, astrophysicist Neil deGrasse Tyson will introduce one of the student short films. President Obama will talk about his ConnectED goal of connecting 99% of students to next-generation broadband and wireless technology within five years.

The festival will begin at 3:30ET in the East Room. Cosmos: A Spacetime Odyssey will premiere simultaneously across multiple Fox Networks Channels, including Fox and NGC on Sunday, March 9th. Follow the jump for more details and links to live-stream the White House Student Film Festival.

Fox Broadcasting Company (FOX) and National Geographic Channel (NGC) will host a special preview of COSMOS: A SPACETIME ODYSSEY at the White House on Friday, Feb. 28, as part of the first-ever White House Student Film Festival. The festival, which will take place in the East Room at 3:30 PM ET, celebrates the Obama Administration’s commitment to using technology in the classroom. As part of the event, President Barack Obama will deliver remarks detailing progress toward his ConnectED goal of connecting 99% of students to next-generation broadband and wireless technology within five years.

Announced last November, the Film Festival is a video competition for K-12 students to create short films on how technology is used in their classroom, or the role technology will play in education in the future. More than 2,000 videos were submitted, and the finalists have been invited to the White House for the film festival, during which they will have their short films screened.

More than three decades after the debut of “Cosmos: A Personal Voyage,” Carl Sagan’s stunning and iconic exploration of the universe as revealed by science, Seth MacFarlane has teamed with Sagan’s original creative collaborators – writer/executive producer Ann Druyan and co-writer, astronomer Steven Soter – to conceive the 13-part series that will serve as a successor to the Emmy and Peabody Award-winning original series.

Carl Sagan’s original series “Cosmos” was first broadcast in 1980 and remains the most globally successful American public television series of all time. Seen by more than 750 million viewers, “Cosmos” has remained popular throughout the world.

As with the legendary original series, the new COSMOS is the saga of how we discovered the laws of nature and found our coordinates in space and time. The series brings to life never-before-told stories of the heroic quest for knowledge, transporting viewers to new worlds and across the universe for a vision of the cosmos on the grandest – and the smallest – scale. The series invents new modes of scientific storytelling to reveal the grandeur of the universe and re-invent celebrated elements of the original series, including the Cosmic Calendar and the Ship of the Imagination. The most profound scientific concepts are presented with stunning clarity, uniting skepticism and wonder, and weaving rigorous science with the emotional and spiritual into a transcendent experience.

Last year, the President announced ConnectED, an initiative designed to enrich K-12 education for every student in America – empowering teachers with the best technology and the training to make the most of it, and empowering students through individualized learning and rich, digital content. At the center of that program was a challenge to connect 99% of students to next-generation connectivity within five years, as a foundation for a transformation in the classroom.

Today, fewer than 30% of schools have the broadband they need to teach using today’s technology; under ConnectED, 99% of American students will have access to next-generation broadband by 2017. That connectivity will be the bedrock of a transformation in the classroom experience for all students, regardless of income. As the President said, “In a nation where we expect free WiFi with our coffee, why shouldn’t we have it in our schools?” With leadership from the Federal Communications Commission (FCC), Department of Education and the private sector, President Obama’s ConnectED initiative will, within five years, connect 99 percent of America’s students to the digital age through next-generation broadband and high-speed wireless in their schools and libraries. ConnectED will also provide better broadband access for students in rural areas, by expanding successful efforts to connect parts of the country that typically have trouble attracting investment in broadband infrastructure. For more information, visit www.whitehouse.gov/ConnectED.