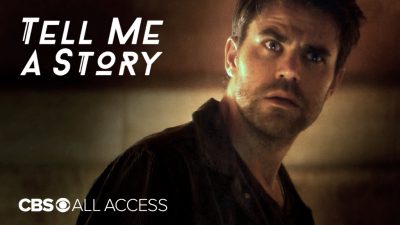 Kevin Williams (Scream, The Vampire Diaries, The Following) has taken three classic fairy tales and twisted them into a psychological thriller – Tell Me a Story – for CBS All Access.

How much has he twisted them? Check out the trailer below to find out.

Tell Me a Story will premiere on CBS All Access on Halloween (Wednesday, October 31st). Episodes will be released weekly on Thursdays thereafter.

TELL ME A STORY takes the world’s most beloved fairy tales and reimagines them as a dark and twisted psychological thriller. Set in modern-day New York City, the first season of this serialized drama interweaves “The Three Little Pigs,” “Little Red Riding Hood” and “Hansel and Gretel” into an epic and subversive tale of love, loss, greed, revenge and murder.

CBS All Access’ growing slate of original series currently includes STAR TREK: DISCOVERY, THE GOOD FIGHT, NO ACTIVITY and STRANGE ANGEL, with new episodes streaming Thursdays. CBS All Access’ original series library will continue to expand with ONE DOLLAR, THE TWILIGHT ZONE and additional programming to be announced.