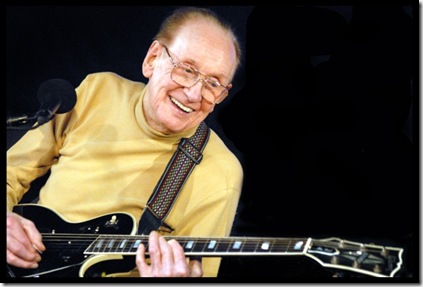 Lester William “Les Paul” Polfuss, the man who invented the solid body electric guitar that bears his name – and was one of its greatest ambassadors – has died at the age of 94 of complications arising from pneumonia.

Paul’s impact on popular music cannot be overstated. He is also credited with inventing methods for multi-track recording and echo effects. His playing was nimble and he had a series of hits in the ‘50s with his wife, Mary Ford, including Vaya Con Dios and How High the Moon.

Artists like Chet Atkins – who referred to Paul as “one of my idols” – were influenced by his playing and made use of his other technical innovations. When Paul was inducted into the Rock ‘n’ Roll Hall of fame, the late Ahmet Ertegun [co-founder of Atlantic Records] said, “Without him, it’s hard to imagine how rock ‘n’ roll would be played today.”

In 1976, Paul earned a Grammy Award for his collaboration with Chet Atkins, Chester and Lester and beginning when he was 70, he returned to the stage for weekly appearances in New York clubs. During that time, he played with greats like Tony Bennett and Paul McCartney [who told him that the Beatles used to play his hits onstage].

Paul was inducted into the National Inventors Hall of Fame in 2005 for “his innovations led to his first solid-body electric guitar in 1941” and pioneering techniques “that transformed music-recording technology.”