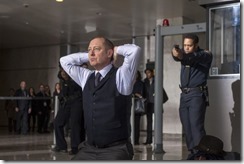 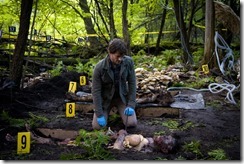 NBC is making a splash at Comic-Con 2013 with stars and producers of several shows – including The Blacklist (above left), Community, Grimm, Hannibal (above right), and Revolution – headlining panels. Ironside star Blair Underwood will be a part of the TV Guide Fan Faves panel, while SNL veteran Seth Meyers and Late Night with Seth Meyers producer Michael Shoemaker will appear on the Hulu panel.

“The Blacklist,” “Hannibal,” “Grimm,” “Revolution” and “Community” will headline at Comic-Con, along with NBC talent from “Saturday Night Live,” “Late Night with Seth Meyers” and “Ironside” also participating on various panels.

Featured during the “Grimm” panel will be a special trailer of the new Friday night series “Dracula,” starring Jonathan Rhys Meyers.

For decades, ex-government agent Raymond “Red” Reddington (James Spader) has been one of the FBI’s Most Wanted fugitives. Now, he’s mysteriously surrendered to the FBI with an explosive offer: He will help catch a long-thought-dead terrorist under the condition that he speaks only to Elizabeth “Liz” Keen (Megan Boone), an FBI profiler fresh out of Quantico. Liz soon discovers that Red has compiled a secret list of criminals over the years: a “blacklist” of politicians, mobsters, spies, and international terrorists. He will help catch them all … with the caveat that Liz continues to work as his partner.

“Hannibal,” which is based on the characters created by author Thomas Harris in his novel “Red Dragon,” was one of the best-reviewed series of the past season and was recently renewed for season two. Hugh Dancy plays criminal profiler Will Graham while Mads Mikkelsen plays psychiatrist Dr. Hannibal Lecter.

“Grimm,” a drama series inspired by the classic Grimm Brother’s Fairy Tales, follows Portland homicide detective Nick Burkhardt (Giuntoli) as he tries to find the balance between normal life and his birthright as a Grimm, an elite line of criminal profilers who have the ability to see the monsters that lurk below a seemingly human surface.

Who: Executive producer Eric Kripke and others to be determined

In its first season, “Revolution” examined why the Earth’s power was turned off and asked how the world’s citizens are expected to survive. In the season finale, the power is turned back on, but at what cost and consequence? The second season begins in the fall.

“Community” is back at Comic-Con and ready to celebrate with the show’s devoted fandom. Come be a part of the study group for a panel and Q&A moderated by Chris Hardwick (“The Nerdist”) and find out firsthand what surprises are in store for the series when it returns to NBC for its fifth season.

Additional panelists are expected to be announced in the coming weeks.

NBC Entertainment develops and schedules programming for the network’s primetime, late-night, and daytime schedules. NBC’s quality programs and balanced lineup have earned the network critical acclaim, numerous awards and ratings success. NBC has earned more Emmy Awards than any network in television history. NBC’s roster of popular scripted series includes the critically acclaimed “Parks and Recreation” and “Community,” as well as new comedies “The Michael J. Fox Show,” “Sean Saves the World” and “About a Boy.” NBC’s drama slate is highlighted by the buzzworthy new series “The Blacklist,” “Ironside” and “Crisis,” veteran series “Law & Order: Special Victims Unit,” “Parenthood” and “Grimm,” and the acclaimed recent additions “Chicago Fire” and “Revolution.” Unscripted series for NBC include the vocal competition hit “The Voice” as well as “The Biggest Loser,” “The Celebrity Apprentice” and the perennial #1 most-watched summer series, “America’s Got Talent.”