Secret Identities: The Asian-American Superhero Anthology may represent something of a breakthrough. As an ethnicity that both has a rich and powerful tradition and is greatly under-represented in comics [of all genres – not just the superhero one], a number of very talented Asian-American writers, artists and writer/artists have banded together to produce a volume of superhero stories that range from the straightforward superhero yearn to biting satire. If they can’t find superheroes to relate to, they’ll just go ahead and make their own! 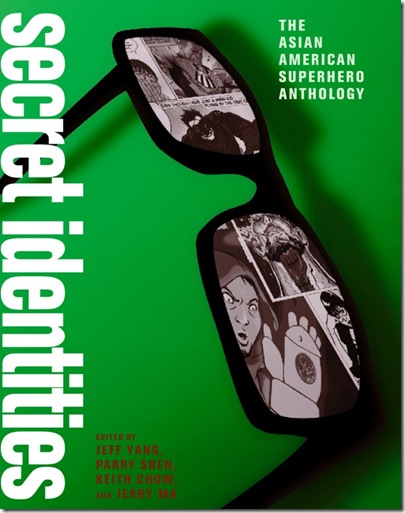 The fun begins with a parody of the cover of X-Men #1 – The Y-Men, featuring a number of Asian stereotypes [Coolie, Madame X, Kamikaze, Riceman and Four Eyes], just to let us know that no targets are sacred, especially the politically incorrect ones. That cover turns out to be the cover of a comic that a young Asian-American boy is reading the comic as his mom drives him to school in his new t-shirt [a real badge of dishonour]. It’s a story about turning embarrassment into motivation – something that rings true for anyone who’s paying attention. The story is by Jeff Yang, with art by Jeff Castro.

From there, the stories hop all over the various aspects of the superhero genre, from Yang and Benton Jew’s unique take on the John Henry legend to David Kim, by John Kuramoto and Christine Norrie, about a guy whose parents keep setting him with potential sidekicks to a really good satire of the Green Hornet – The Blue Scorpion & Chung [Story: Gene Yang; Art: Sonny Liew] – that also has a straightforward break that provides poignancy and a kick, simultaneously.

If you want super government agents, or ultra-powerful special ops teams, you’ll find them here, too – along with kid heroes, political stories, purely fun stuff and more drama than you’ll know what to do with. The sheer variety of approaches and motivations; styles and characters tell us that we probably needed to have a volume like Secret Identities to remind that superheroes should come in all shapes, sized, colors and creeds – just like in the real world.

The one problem for this anthology may be that there are too many stories that end with its readers wanting more. I know I want to know what happens after the cliffhanger ending of Jamie Ford and Alexander Tarampi’s Gaman [it’s not nice to leave people hanging like this, guys!] and several other stories included in this delightful and illuminating volume.

Secret Identities: The Asian-American Superhero Anthology is a tremendously rewarding experience. When’s Volume Two coming out? I want to know what happens next, dammit!