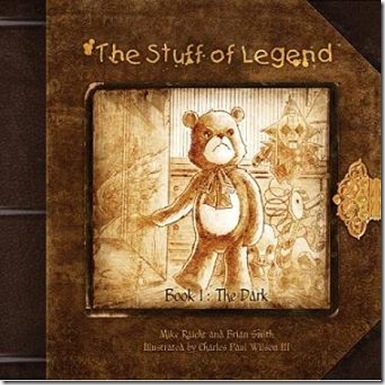 The Stuff of Legend: Book 1: The Dark may be an unwieldy title, but the graphic novel – the first in a series that collects the serial originally published in the Th3rdWorld Studios comic book – is a fast-paced, darkly disturbing tale that posits the existence of a real Boogeyman. Not only that, said Boogeyman kidnaps young children and spirits them away to his land, The Dark, to do with as he sees fit.

The Stuff of Legend: Book 1: The Dark begins with the Boogeyman kidnapping a young boy and his toys –at least, his seven favorites – coming to life and heading into The Dark to rescue him. The story itself is very Brothers Grimm. The Dark is not a particularly welcoming place – though the toys become real there: real people, real animals.

The cast of characters is filled with typical kids’ toys – Max, the teddy bear; The Colonel, a toy soldier; Percy, a piggy bank; Jester, a Jack in the Box; The Princess, an Indian maiden; Harmony, a fairy and Quackers, a wooden duck on wheels – and an eighth, already living character in Scout, The Boy’s new puppy.

Their journey into the dark is fraught with peril – it’s not long before one of the group dies [being real has consequences…], and another is lured by The Boogeyman into betrayal. Even before these key events, there is a fierce battle – and not long afterward, the survivors find themselves in a town that is also a game board. There they learn that they must play the game – according to rules quoted by The Mayor, from a book that only he gets to read.

Mike Raicht and Brian Smith have written a story that combines plotting simplicity with complex and entertaining characters, each of whom add something to the team – and added a smart, ruthless villain to force them to be more than they believed they could be.

Charles Paul Wilson III’s art is evocative of the 40’s – the story takes place during the Second World War [The Boy’s father is away at war – we see a letter from him, at one point], and the colorists – Jon Conkling and Michael DeVito – use shades of brown to evoke sepia photos. The result gives warmth to the group and a dark edge to The Boogeyman.

The Stuff of Legend: Book 1: The Dark is one of those books that provoke a desire to share – the kind of book one buys for all of one’s friends and family. It grabs the reader from the first page and is quite enthralling. In an added bit, we are given a peek inside The Colonel’s journal – an assessment of the situation, and his group of determined rescuers. Also included: a page of character designs for The Boogeyman and cover art for Books 1 and 2 – and the Boogeyman Edition.

This book is kids’ stuff in the same sense that the Brothers Grimm are kids’ stuff – it’s filled with moments of darkness and loss as well as a surprising depth and humanity.

You need to read this book.