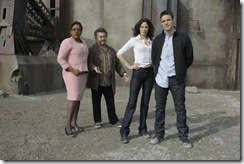 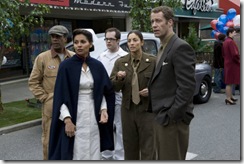 New York, New York – August 11, 2010 – This December Syfy fans no longer have to imagine what the holidays would be like in their favorite government hideaway or quaint town of geniuses. For the first time, two of Syfy’s most popular original scripted series will debut special stand-alone holiday episodes featuring both new and familiar guest stars (exact premiere dates are TBA).

On Warehouse 13, as the Warehouse team prepares to celebrate the holidays in snowy South Dakota, Pete (Eddie McClintock) and Myka (Joanne Kelly) are called upon to hunt down a malevolent Santa Claus. Meanwhile, in time for Hanukkah, Artie and his estranged father, Isadore Weisfelt reunite after 30 years.  Award-winning actor Judd Hirsch returns to television guest starring as Artie’s father. Paul Blackthorne also guest stars as a harried work-a-holic who becomes terrorized by a strange series of robberies committed by a thief dressed as “jolly old Saint Nick!”

Judd Hirsch has been nominated for an Oscar for Ordinary People and honored with an Emmy for the revered comedy Taxi. He has also received a Golden Globe (Dear John) and two Tony Awards (I’m Not Rappaport, Conversations with My Father). Paul Blackthorne previously portrayed the wizard P.I. Harry Dresden on the Syfy series Dresden Files, appeared on Lipstick Jungle with Brooke Shields and can currently be seen on The Gates. Executive Producer and Showrunner Jack Kenny will direct the December holiday episode.

On Eureka, as the Global Dynamics employees celebrate the season at the company holiday party, staff member Dr. Noah Drummer (Chris Parnell) nearly absconds with a volatile experiment. The halls get seriously decked when Dr. Drummer’s unstable hydrogen crystal starts to grow at a frightening rate. Carter (Colin Ferguson) and Henry (Joe Morton) attempt to deal with the potentially explosive crystal, but before long the true scope of the problem is revealed, and it will take more than tinsel and carolers to save Christmas and Eureka. Former series regular Matt Frewer also returns as Taggert.

Chris Parnell appeared as a regular cast member on ten seasons of Saturday Night Live and was featured in the show’s breakout digital short Lazy Sunday. He is a recurring guest star on 30 Rock as Dr. Spacemen.