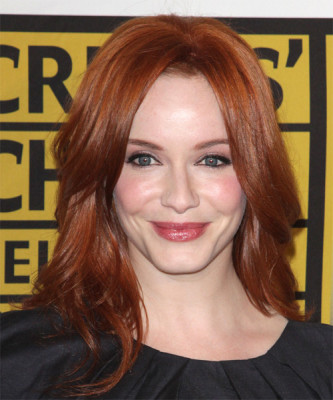 Christina Hendricks has joined the cast of SundanceTV’s Hap and Leonard – the series about two poor, struggling martial artists trying to stay on the right side of the law.

Hendricks will play Hap’s ex-wife Trudy, who resurfaces after a two-year absence, with an offer Hap can’t refuse. For more, follow the jump. Hap and Leonard will air in early 2016.

“Hap and Leonard” follows the story of Hap Collins (Purefoy) and Leonard Pine (Williams).  Hap is a white working-class laborer who spent time in federal prison for refusing to be drafted into the military and serve in the Vietnam War. Now in his 40s, he is just barely making ends meet picking roses on an East Texas plantation. His confidante and lifelong best friend is Leonard, an openly gay, black Vietnam vet with anger issues. Having been raised by an uncle who shunned him after learning he was gay, Leonard’s only support in the not so progressive, rural South is Hap.  Together, they struggle through misadventure in a bid to stay on the right side of the law in 1980s East Texas. Hendricks will play Hap’s ex-wife Trudy, who resurfaces after two years with a proposition for Hap that he cannot refuse. By turns funny and shocking, “Hap and Leonard” provides an unpredictable and side-eyed look into race, class and friendship.

Hendricks’ portrayal of Joan Harris on “Mad Men” earned her five Emmy® nominations for Best Supporting Actress in a Drama Series, as well as two Critics’ Choice Television Award wins for Best Supporting Actress in a Drama Series. She can currently be seen in Comedy Central’s “Another Period” and recently appeared in Ryan Gosling’s directorial debut, Lost River, John Slattery’s directorial debut, God’s Pocket and Sally Potter’s Ginger & Rosa. She will next be seen in Dark Places opposite Charlize Theron. Hendricks is represented by LINK management and ICM Partners.

As previously announced, “Hap and Leonard” has been picked up for six one-hour episodes and will air in early 2016. Produced by Sundance Studios, “Hap and Leonard” is created by director/writer Jim Mickle and writer Nick Damici, who partnered on the film adaptation of Joe Lansdale’s “Cold in July” with Michael C. Hall and Sam Shepard. They have adapted Lansdale’s Hap and Leonard novels, novellas and short stories of the same name for this project. Mickle will also direct.  The project is executive produced by Nick Shumaker and Jeremy Platt, along with co-executive producers Joe Lansdale and Lowell Northrop and producer Linda Moran.

SundanceTV is making and celebrating television as distinctive as the best independent films. Working with today’s most remarkable talent, SundanceTV is attracting viewer and critical acclaim for its original scripted and unscripted series. Launched in 1996 and owned and operated by AMC Networks Inc., SundanceTV delivers on the spirit of founder Robert Redford’s mission to celebrate creativity.  www.sundance.tv